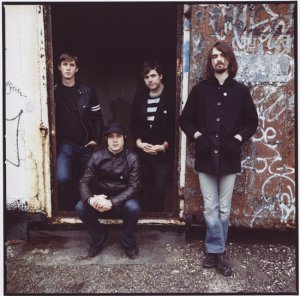 I spoke with Andy Jackson of Hot Rod Circuit..oh, a month ago, and didn't bother to clear up some mangled audio from the tape recorder until the other night. But in any event, you now finally get an interview with the band frontman with some mostly up-to-date information about them and their forthcoming Immortal debut, The Underground Is a Dying Breed.

The Underground Is a Dying Breed is due out this spring. I last spoke with Andy in 2004, shortly before the release of the band's last full-length, Reality's Coming Through (Vagrant).

Two years after its release, how do you feel about Reality's Coming Through now?

I love that record. If you ask anybody in our band, it's one of our favorite records to this day. It might not have been the right record to make at the time, but I'm really happy with it.

What do you mean by "the right record at the time?"

I think that a lot of people we know back at our old label as well as our fans really seemed like they wanted [2002's] Sorry About Tomorrow again, and we didn't want to make that record. [Reality] had a little more production on it, it had a little more twang to itâ¦ People in general just didn't get it. A lot of our hardcore fans at the time either loved it or hated it. It's a more mature record; it's not a record for some little punk rocker.

How come you opted to produce the album yourself this time around, letting [Reality producer Tim] O'Heir just mix it?

I've been producing and recording bands for years and I finally have my own studios. We talked about it the past year as we were separated from Vagrant. Without a label, we decided to just record it ourselves and shop it. It kind of just fell into our laps with Immortal; they picked it up and said we could still make the record the way we wanted to. We just thought it would be fun where there's no limitations, nobody telling us what to doâ¦just like old times.

What else are you doing with this album musically and/or lyrically you don't think you've done with previous ones?

Well, I usually don't write music without the lyrics first. I usually do my lyrics as I'm writing the music, or I write my lyrics first. But there's a couple songs where I've just had a different vocal approach to things because I'm hearing a song and trying to get a certain melody. There's a couple songs that I think show it; it was [more functional] to be able to play around with it. 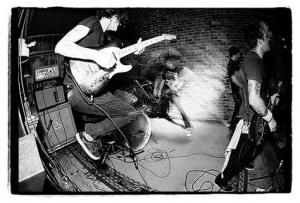 You know, I have to say, Immortal's been making some strides lately. I think upon going independent they started off signing a couple iffy acts, but signing bands like you guys, Agent Sparks and Brazil, it seems like they're suddenly going for more of a credible, Equal Vision-style diversity, and it's hard not to respect that.

Definitely. I mean, I haven't had a chance to check out all the bands on the label, [though] I have some of the records on my desk. From what I hear, you got your screamo, you got your little pop bands, you knowâ¦ They're just searching for something, a band that's gonna help their label. Apparently Jason from Immortal is a fan, and they have some other guys that work there that are big fans, and that's what really helps us. They really know what we're about, and there's no limitations. They were just like, "here: here's money, make the record you want to make." We sent them some demos and they liked them.

What do you think happened with Vagrantâ¦?

I don't ever see us being a…Panic! at the Disco or anything kinda big. We're a band that writes songs that are truly heartfelt, and people that don't listen to that kinda music can relate to. We're an underground indie rock band.

Vagrantâ¦great peopleâ¦but I think we just got lost in the shuffle with bigger bands like Dashboard and Alkaline Trioâ¦ They're real big about this whole 'shelf life' thing up at Vagrant; they think, "oh, you got a good record that's gonna sell [however many] copies [this] year," and [they already know] what bands are gonna blow upâ¦ And that's kinda how they treated us. They didn't really go the extra mile to push the band, with MySpace, [getting] interviews, and such.

With really no offense intended, it seems like the band never quite had that lasting period of hype a lot of bands receive, and if you did you've survived it. Like instead of being pulled up as far as possible and then dropped like a bomb, it's more been a fairly smooth career trajectory I think. Would you agree?

What would you attribute that to?

We were always doing our own thing…we never did anything like what anyone else was doing. [Therefore] I think it took a little longer for people to catch onto Hot Rod Circuit. I think it helps us retain fans in the long run.

"The Underground Is a Dying Breed." Give me your thoughts on that statement. 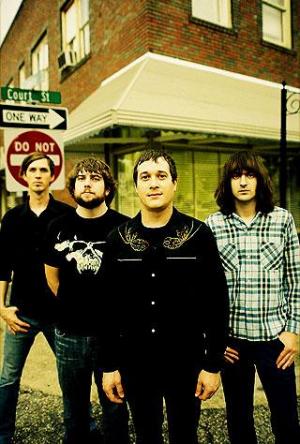 It's a lyric from one of the songs; I think it kind of speaks for itself. I just think the underground is a dying breed and everything that would've been underground five or ten years ago is in the mainstream now. There is no underground anymore.

So, I'm guessing you view this as a negative thingâ¦

Yeah, because that's where Hot Rod is. We're an underground indie rock band. I don't ever see us being a…no pun intended saying a band's name but I don't see us being a Panic! at the Disco or anything kinda big. We're a band that writes songs that are truly heartfelt, and people that don't listen to that kinda music can relate to.

What's the status on Safety in Numbers? There hasn't been a real update in quite some time…

We're really not doing much anymore. We put out the record [2004's In the Key of D], then one of the guitar players had a really bad divorce and lost his kids, and things got crazy, and we kinda stopped doing it. We're not doing much right now.

There is one thing Iâm doing though, called the Escape Frame. Itâs more of a Postal Service-y electronic thing. Itâs two guys Iâm producing, and me and my wife helping on it; one of the guys played drums for Trust Company.

Will anything from that be released this year?

Yeah, weâre actually in the middle of recording a record. You can check out some demos, though right now those have electronic drums -- weâre re-tracking with real drums now. But you can get a really good idea of what itâs gonna sound like; the demos are really good. Weâre basically just recording it ourselves and shopping it around.

Do you think the band will do any headlining tours to support the album? I mean, even now, that's gonna be a huge pool of songs to choose from…

Yes, actually weâre doing aâ¦a headlining slash co-headlining tour with Limbeck and the Forecast [supporting] from April 4 through May 13.

Yeah, with a few Canada dates. Oh, and we were just confirmed for Warped Tour July 27 through August 25.

What are your hopes for this album? What are you looking to accomplish?

I think we've already accomplished what we want to do. We made a record that we love and we did it ourselves. If we sell ten copies I'm happyâ¦but of course, every band wants to blow up, etc. I would just like to do, at leastâ¦Sorry About Tomorrow. Or half of that; I'd be elated.