The Police reunite for Grammy awards 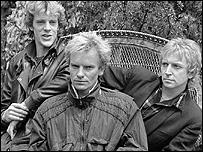 Contributed by beekeeper, Posted by Aubin Paul 14 years ago

Just a few weeks after rumours began to spread, confirmation has come in that the Police will reunite this year for the Grammys in an event that will mark their 30th Anniversary.

This would be the first Police tour since the band broke up in Melbourne, Australia in 1984. The band consists of pop-sensation Sting on bass and vocals, Andy Summers on guitar and Stewart Copeland on drums. They last performed together in celebration of their 2003 induction into the Rock and Roll Hall of Fame.