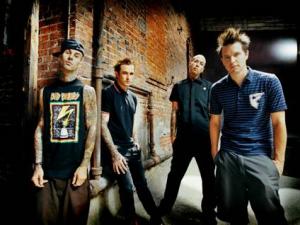 Via an Anonymous Source, Posted by Aubin Paul Universal Music Group 14 years ago

Plus 44 drummer Travis Barker's recent arm injury continues to cause problems. His bandmate Mark Hoppus recently posted an update on the status of the injury:

After a bunch of mri's and a few doctors, they have determined that his arm still has not healed completely from the injury he sustained during the video shoot. His arm is getting better, but is not all the way better yet. It is great news that his condition isn't more serious.

He is going to need to start using a device called a "bone stimulator" to help regenerate the bone tissue and fill in the stress fractures. His doctor also suggested that he start doing some drumming to build up strength in his arm and bone. So he is going to start working his arm again and using the bone stimulator device every day to build his arm back up to the point where he can play and not be in pain.

Then in another two weeks he is going back in with his doctors to check how it is all working. Basically, we are on the road to recovery and are getting near grandma's house, so put on your shoes because we are almost there.

The injury recently forced Barker off their ongoing European tour. No word yet on whether Travis will recover in time for the Honda Civic tour headlined by Fall Out Boy.

The Pilot (ex-Hidden in Plain View), Love Arcade, The Hanks on Rossstar tonight