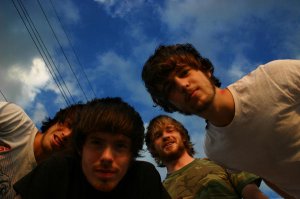 by Aubin Paul Vagrant 14 years ago

As for the record itself, the band had this to say:

When we started writing the songs for Black Earth Tiger over a year ago we knew we wanted to make something different from Soundtrack To A Headrush. Writing STAHR had started so much for us but it had been done so long ago. It had died, and we knew this album had to be about endings. Black Earth Tiger is all about endings. I think there is, in the collective consciousness, this feeling that maybe the world is going to end. Its something I've been obsessing over for years, and Black Earth Tiger touches on that; but it also touches on the end of relationships, ideas, lives and eras.

The record will be the band's first since 2005's Soundtrack To A Headrush.