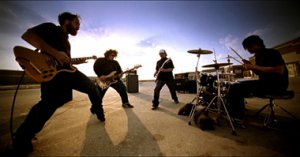 Smallman Records is reporting that Edmonton band Choke has decided to call it quits. They have announced a farewell tour with labelmates Ghosts of Modern Man and Daggermouth supporting. Drummer Stefan Levasseur explains:

After a handful of videos, six full-length albums, and countless tours, stories, and new friends we have decided to officially announce the end of the band.

In the end, it seems that, as is too often the case, life is getting in the way of living. It would be impossible for us to dedicate the time necessary to write another album we could be more proud of than Slow Fade: or How I Learned to Question Infinity and we feel that touring one last time across Canada and celebrating the last thirteen years with all of you is more befitting the end of this stage of our lives.