Every Time I Die discuss “The Big Dirty” 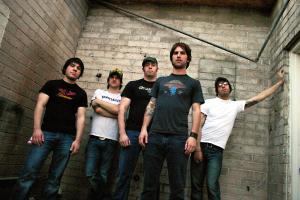 by Meg Reinecker Ferret 13 years ago

Every Time I Die are currently recording their new album The Big Dirty in California with Steve Evetts (Dillinger Escape Plan, Deadguy). The band had this to say about the new album:

Chock-a-block with riffs that only 4 months of a Buffalo, New York winter could spawn, this new record will undoubtedly satisfy those that have followed the band since their first full length release Last Night In Town all the way through Gutter Phenomenon. And if you were one of the 38 confused men who strayed somewhere along that interim, we welcome you back with open arms. You want ironically distasteful rock and roll pretenses? You got em. You want riffs so filthy they should have a moustache and wear elastic work out pants when they go out to eat at the Olive Garden? Right here, boys. You want mosh parts so brutal it could star opposite Charles Bronson in ANY of the Death Wish movies? Come get some.

The Big Dirty, which is the follow-up to 2005's Gutter Phenomenon, will be released in August.