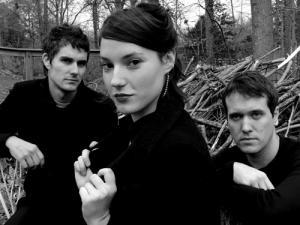 We recently spoke to Keeley Davis, the former frontman of Engine Down, bass/synth player for Denali and current member of Sparta. Keeley talked to us about his new side project Glos (or "Glös") and answered some questions about the new project as well as reuniting with longtime collaborator Cornbread Compton and his sister, Maura Davis.

The band recently released their debut full length, Harmonium, and you can find some music from the album on their Punknews.org Profile.

Glös reunites you with your collaborators from both Denali and Engine Down; and I understand many of the ideas for the songs began while Engine Down was still touring. How do you feel Glös continues - or breaks from - what you have done in your previous bands?

Glös basically continues the chemistry that I had with both Cornbread [Compton] and Maura [Davis], and allows us to create any type of music we feel fit. Since there is the freedom to play any instrument we want without the fear of reproducing it live, this band fulfills any creative outlet we have wanted to tap into.

Because of your long relationship with Compton, and of course, with your sister, the band must have a very interesting dynamic. Many people talk about their bands being like family, but it's literally the case here. What is it like in Glös?

Cornbread Compton and I have been playing music for so long that we are able to finish each other’s sentences.

It’s the easiest creation I've ever been a part of. First off Cornbread Compton and I have been playing music for so long that we are able to finish each other’s sentences. We gave each other total freedom to create whatever we wanted over each person's songs. Most every time it came out exactly like we wanted without having to explain what we wanted the other person to add.

How do you balance Glös and Sparta? On that note, with each of you occupied with your own bands, will Glös remain a part-time/off-time project? Is it a one-off?

The glos record was mostly written before I joined Sparta. Since glos is able to write songs without ever being in the same room, city, or time zone with the aid of laptops and the internet, we are able to work on songs at any moment.

We are all very busy, but still find time to write glos songs. We are already writing the next record at this moment. There is so much freedom in this band, it is almost like therapy from the world of touring, deadlines, managers, band member tension, etc.

It took two years and you wrote 20 songs to produce Harmonium; how do you boil down that much of your life into a single album of songs?

We would have a song and make five different versions of it depending on the mood that we woke up in. I learned a lot about going with your first instinct and then spending extra time making the mix all that it can be. The process of recording and mixing would usually take a break when a tour came up with the other bands.

Not to harp on Engine Down too much, but it was a bit of a shock when the band split up, and there wasn't much in the way of an explanation. With some time between you and the band, do you feel you can elaborate on what happened?

Engine Down was a wonderful experience for all of us. At the height of our involvement we just felt like we had accomplished what we wanted to do in Engine Down. Every record with Engine Down was about growth and we just felt it was time to grow in different ways outside of the band. We were friends first and wanted to keep it that way since all of our peers in bands seemed to break up and never speak again. 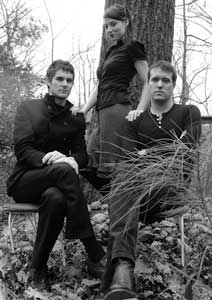 We wanted to go out with a bang.

How do you pronounce Glös?

It depends on whom you ask. Since we started writing the record in Europe it just seemed appropriate to give it a Euro vibe.

I understand Maura came in much later in the process, but her vocals seem very much an organic part of the songs. Did you write them with her in mind?

This is a very good example of why its so natural for us all to work together. Our styles just mesh perfectly and Maura's voice blended in like butter. We didn’t think about including Maura until all the songs were written mainly because we had not realized how easy it was going to be to send each other music from various cities. At the time she lived in a different state and once we thought of including her… the rest is history…. and I guess the future too.

It started for us. We just wanted to hear songs like these. Once it seemed possible to make a record, we knew that fans of Engine Down and Denali would see the previous influence and latch on. Thankfully fans of the two bands were music lovers and not hype followers.