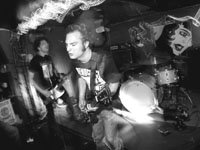 The bone-crushers in Akimbo have posted some tourdates on the west coast in anticipation of both of their upcoming releases. That's right, they've finished recording two albums with Chris Owens of Lords in Louisville, Kentucky. The band will be releasing Navigating the Bronze, mastered by Ed Brooks at RFI Mastering, on Alternative Tentacles on August 21, 2007. The second album, Jersey Shores, will be released by an unnamed label at an unnamed date. Expect to see samples from the album coming in late July.

The albums are the follow-up to Forging Steel and Laying Stone which was released in 2006.