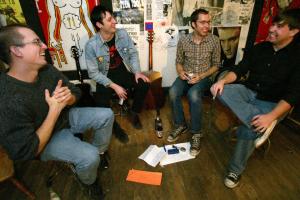 I recently chatted with one of pop-punk's finest bands, the Copyrights about everything from stealing cable, to harmonicas, to the difference between good and bad pop punk. Oh, yeah, we also discussed their new album, Make Sound, out now on Red Scare Industries. 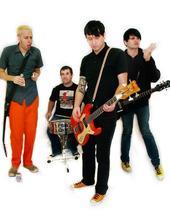 Punknews: How's it going?
Fletcher: Good, just got home from work, and I just checked out that new Bad Brains song you have up.
Punknews: HR used to live here.
Fletcher: Yeah?
Punknews: Oh yeah, dude is off the charts.
Fletcher: The bass guitar sound on this new [Bad Brains] album sounds sooo awesome.
Punknews: Those guys are proficient musicians.
Fletcher: I saw the Soul Brains once, he was out of his mind.
Punknews: So what's your day job?
Fletcher: Um, well I just moved to Chicago, so I've got a couple right now.
Punknews: Still getting a "discount" on your internet?
Fletcher: Nope.
Punknews: That sucks
Fletcher: Well…we split it with the neighbors, so thatâs not so bad.
Punknews: I'll tell you what to do…pay for internet, then get cable for free. It all comes through on the same line.
Fletcher: Yeah but we have a house split with the people upstairsâ¦soâ¦.I think this should be the entire interview, nothing about the band or music.
Punknews: Totally, kids will be saying "wow, they are so fucking good they aren't even trying to sell themselves".
Fletcher: Haha.
Punknews : "I need to buy 5 copies!"
Fletcher : Yeah, well we're pretty good at marketing ourselves, let me tell ya.
Punknews : Yeah?
Fletcher: No.
Punknews : Did you see the press release Brendan (Kelly) wrote? [for Make Sound]
Fletcher: No, but I hear its accurate.
Punknews: I wish I still had my copy, it said something to the effect that you guys had been around since the mid-80's…
Fletcher: Well we have, but not playing music. Actually I heard [the press release] was all bullshit.
Punknews: It was, he even threw in some weird baseball analogy.
Fletcher: Ha.
Punknews: So, how'd you hook up with Toby [Red Scare Industries]?
Fletcher: He heard Mutiny Pop and really liked it, so he was interested in releasing an album. I know Brendan (Kelly) was telling him to check us out, along with a few other people.
Punknews: Ok, so on the subject of "pop punk", do you consider your band "pop punk"?
Fletcher: Yeah, totally.
Punknews: How do feel about what the mainstream media calls "pop punk"?
Fletcher: Well it's weird. I was really confused when, all those "pop punk" bands started to get big, and I was like "Huh? This doesn't sound like the "pop punk" I know?"â¦It kinda makes sense to me now because I think the same thing happened with the word "emo". Itâs just a blanket term. When originally it did describe a bands sound. As far as our "pop punk" and the mainstream "pop punk", we don't really cross paths too much. I think that's why you see some of the new bands using some new terms for their sound, "ramonescore", "buzz pop", etc.
Punknews: Yeah. I've noticed a lot of bands hate being "classified", but when someone asks you to listen to something; donât you normally ask "what does it sound like"?
Fletcher: I don't really mind being classified. Itâs something that has to be done. It usually goes something like, "yeah they're pop punk, but itâs not like that, it's good pop punk". No faux hawks here!

I don't really mind being classified. Itâs something that has to be done. It usually goes something like, "yeah they're pop punk, but itâs not like that, it's good pop punk". No faux hawks here!

Punknews: Speaking of which, as a band with roots in traditional "pop punk", does it bother you when other bands try to fly that flag that do not necessarily fit the description as you see it?
Fletcher: Nah, who am I to say who's what. All I can do is say their band sucks. 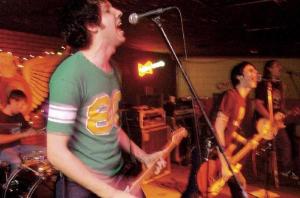 Punknews: Youâre playing Insubordination Fest, which is the premiere event of good pop punk, thoughts on that?
Fletcher: Shiiit, that's going to be the show of the year, you going?
Punknews: I really wanted to and was planning on it, but Iâm gonna be on tour .
Fletcher: Whatâs your band called?
Punknews: Iâm going out with some friends from New Jersey, a band called the Gaslight Anthem. But I will definitely see you at the Fest 6. I know you played there last year too.
Fletcher: Gainesville? That was cool, a little weird playing at first, especially because we got there late. Itâs great that we're playing there this year too, I have to start growing my beard.
Punknews: Thatâs really the only difference between the pop punkers and beardcore kids, I mean, you both rock the high-water pants.
Fletcher: Haha.
Punknews: I think the harmonica [from the song "Kids of the Black Hole] will go over well there this year.
Fletcher: Haha.
Punknews: Do you guys actually use one when playing that song live?
Fletcher: No, but you're more than welcome to hop on stage and play it.
Punknews: No shit?
Fletcher: Yeah, that would be great.
Punknews: I'm gonna hold you to that offer, seriously…
Fletcher: Cool, donât fuck it up!
Punknews: Right. Because everyone plays tight that weekend.
Fletcher: There's a lot important people at that fest, it could make or break us.
Punknews: Hahaha, like Dan Yemin?
Fletcher: Haha, yeah.
Punknews: So, your new album, Make Sound….are you happy with how the record turned out?
Fletcher: Yeah, it turned out good. People seem to like it too. Every time we make a new CD, I think people are going to hate it.

Every time we make a new CD, I think people are going to hate it. 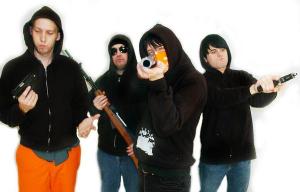 Punknews: The state of punk music in general, itâs reaching an apex in the mainstream, thoughts?
Fletcher: Ummm..yeah I know, but I don't really know. I mean, I don't blame bands for making choices that give them more exposure, but it seems weird to me when bands sign to major labels, or take corporate sponsors.
Punknews: Do you think some of the "ethical stances" in punk rock are often the jaded views of those who never made it?
Fletcher: Probably, it's really easy for people like me, and smaller bands, who have never been faced with decisions that might conflict with the "punk ethics" and all that, to point the finger at bands that decide to take those offers. On a side note, I do kinda wonder what the state of music will be like in 10 or 15 years. I wonder what the influence of music channels like MTV and VH1 have on kids. Because they're not music at all. They're TV shows about rich rock stars. When I was kid MTV sucked, but at least you had Headbangers Ball, or 120 Minutes. It was still somewhat centered around music.

On a side note, I do kinda wonder what the state of music will be like in 10 or 15 years. I wonder what the influence of music channels like MTV and VH1 have on kids. Because they're not music at all. They're TV shows about rich rock stars. When I was kid MTV sucked, but at least you had Headbangers Ball, or 120 Minutes. It was still somewhat centered around music.

Punknews: Well, a lot of bands think its becoming more and more about touring and less about labels and records.
Fletcher: Which is important, and is a necessary, but when you break up all that's left behind is your music, so I feel making good records is important too.
Punknews: Do you feel that your live show has to be representative of your albums, and vice-versa; or can they be separate, yet equally appreciated?
Fletcher: Yeah for us, what we do is pretty straightforward. There are somethings we don't do live, like the harmonica, but for the most part it's all there, or pretty close.
Punknews: Yet…
Fletcher: Yet?
Punknews: Harmonica….live.
Fletcher: True, well Gainesville will witness the harmonica.
Punknews: Iâm gonna hold you to that shit.
Fletcher: Deal, but I'm gonna hold you to not fucking it up. Itâs in "c".
Punknews: Gotcha. Final thoughtâ¦
Fletcher: Final thought? Like on Springer? Go to www.poppunkbored.com and fuck with people.
Punknews: Nah, I have a last question. Do you see yourselves wanting to "grow musically" like other bands say, or would you be content playing the style of music you currently do for 20 years if it paid the bills?
Fletcher: Well, we try not to write the same song twice, but we try not to step too far out of our boundaries, and not to make something too weird. So we'll always continue to change our sound just a little, but probably not enough to throw everyone off.
Punknews: So you'll always, make sound? (sarcastic "har har har") 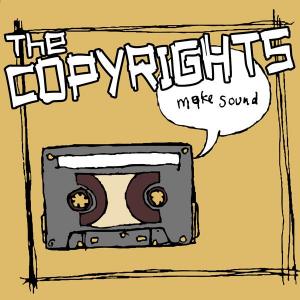 Fletcher: ha! Well yeah, until we decide to break up.
Punknews: Hahaha. Awesome. Thanks for your time.
Fletcher: Have fun editing that shit.