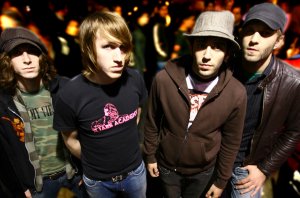 The message came via a MySpace blog posting as well as bulletin. While the band were vague about their reasoning, they did say, "This choice has been one of the hardest things any of us have ever gone through, as the decision has absolutely nothing to do with a lack of passion for making music together or love for each other."

The band has also unveiled some of the dates for their final tour. Joining them for a good majority of it will be Ludo, the Graduate and lablemates the Forecast.

Over the course of their existence, the band released four full–lengths, the last three of which came via Victory Records: 2001's Faster Crashes Harder (Sinister), 2003's Remember Right Now, 2005's Stop Doing Bad Things and last year's final effort, Better Than Knowing Where You Are. Their discography also included a split 12" in 2000 with Don't Worry About It (Walk in Cold) and 2002's Cloak & Dagger Club EP (Sinister).

Music: Druglords of the Avenues: "Where Are You Going?"