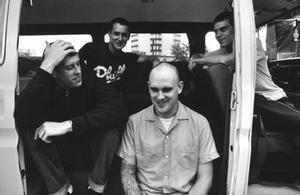 Contributed by onegirlarmy, Posted by Brian Shultz 14 years ago

Oregon's Copper Lung Records has announced an upcoming Kid Dynamite tribute compilation, and many of the artists/songs that it will feature. Amongst the 25 bands announced thus far are I Am the Avalanche ("The Ronald Miller Story"), Crime in Stereo ("Wrist Rocket"), the Ergs! ("Fuckuturn"), First to Leave ("SOS"), This Is Hell ("Troy's Bucket") and Daggermouth ("Bench Warmer").

The record will be titled Carry the Torch: A Tribute to Kid Dynamite. No release date has yet been set.

Music: Emery: "After the Devil Beats His Wife"

Videos: I Am The Ocean: "Text the Sex Rhyme"