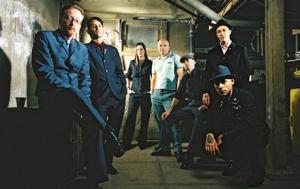 by Aubin Paul Side One Dummy 14 years ago

Flogging Molly has begun recording their new full length and follow up to 2004's Within A Mile Of Home. The band is currently in a studio in Dave King's native Ireland and has also announced the return of accordion player Matt Hensley who left the band in January who has regrouped and is working with the band once again.

Since the release of Home, the band released the live CD+DVD Whiskey on a Sunday.

The Hives detail "The Black and White Album"