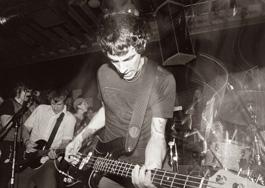 Portland's promising screamo act Life At These Speeds has called it quits. The split appears to be amicable as the MySpace blog that sounds their demise reads:

Life At These Speeds has run its course, the band shall play no more. The end has been in sight for some time and though due to no ill occurrence, the moment has passed and the amps are turned off.

We feel as though LATS was a very worthy venture, as evidenced, if by nothing else, than by the length of the list of friends we owe to its existence. A great many thanks are heaped upon each and every one, known and unkown. These sentiments are conveyed with the utmost sincerity and with the hope that we shall meet again in the future.

The band released (and re–released) a pair of albums in 2006, To Your Health and their self–titled reissue.

Videos: Streetlight Manifesto: "We Will Fall Together (Official)"