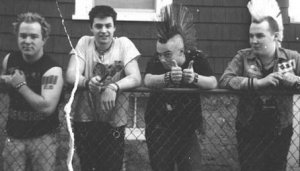 Via an Anonymous Source, Posted by Justin August BYO Break-ups 14 years ago

A Global Threat has called it a day after ten years. The street punk/hardcore hybrid said goodbye via a MySpace blog post.

It's time. So we're going to do it fast. It's just like ripping off a band–aid…1…2…we broke up. A Global Threat is officially over. You can stop cheering now. So maybe your asking why? In the most diplomatic terms the breakup would probobly be characterized as a mutually agreed upon decision made by three individuals for seperate and different reasons. Too vague and impersonal? Sorry, thats all you get. This isn't "Behind the Music". We'll also spare the wistful, sentimental comments on the bands history and the times spent making it. Our history is on record shelves and on worn fliers hung up on the walls of dark clubs, and our experiences and how we feel about it all will be in our heads and hearts (and maybe yours too), and in the end, that's enough. No sense cheapening it on a myspace blog.

To end, the band puts it simply: "Bands come and go, get together and split up. The music and the memories are what lasts forever."

The band released Where the Sun Never Sets in 2006.

Videos: Streetlight Manifesto: "We Will Fall Together (Official)"

Videos: Billy Talent: "This Is How It Goes (Live)"