Contributed by ben_conoley, Posted by Ben Conoley Interviews 14 years ago

We recently had the opportunity to talk with the group's bassist and vocalist Chris Batten about the group's efforts in self–releasing their record and trying to make a name for themselves in North America. 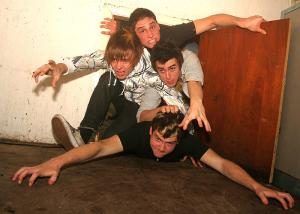 You recently embarked on a tour of the United States before heading over to Europe and then Australia - seems like it's going to be a pretty hectic winter. What are you anticipating?

I'm anticipating a winter full of festivities, jolly boys, hectic shows and we might even try and fit in some surfing around the festivals and shows out in Aussie land. We can't wait to embark on our seven week tour. It's completely the other side of the world for us and for all of us apart from Rory the first time we'll have been to Australia and New Zealand. To say we're looking forward to it is an understatement.

Take to the Skies has been out for nearly two months now, how is it sinking in?

It's great! It's a great feeling knowing we have an album that can now be picked up in a lot of places all over the world. It's something we never expected, especially off our first album. It's a tad strange for us as the album has been released in Europe for over half a year now. It feels like we've traveled back in time a little. Although it's great to get out to the states and play some shows to people who haven't really heard of us or have just heard a couple of the tracks off the album. It's fresh bait for us and we really enjoy performing for them and giving them something to remember - something they haven't seen before.

How do you feel the band has changed since the release of Nodding Acquaintance and Sorry You're Not a Winner back in 2003? The band has changed a lot since those demos. I mean they were recorded in my garage where we'd built a little studio. So the quality is definitely a little on the dodgy side. I think we've come on a lot with our writing. It's very obvious that we have now really started growing the electronic side to our music, after we recorded those demos. We got pretty heavily into writing our own synths, making our own sounds and generally experimenting. We also feel we've grown on the live side of things. We've played a lot of shows in our time and a lot of shows since those demos. All the festivals and tours have really gained us a lot of experience. We had a lot of chances to test out new ideas live which have al just made our live show more exciting.

Take to the Skies is the band's first full length, why did you wait until now, was it just a matter of waiting for the right time?

Well to be perfectly honest, it took a while for us to get our distro and deal sorted. It's not like it is over in the UK. We can't start just up a label and just release it ourselves; we have very few contacts over in the states. We know hardly anything about the US market and it's such a big place. We wouldn't know where to start. We definitely needed some help getting the record released. Due to our slightly different approach to things in the UK, owning our own label and things, it made it a bit harder to get things sorted across the pond.

Of course, you deliberately waited a long time to officially get things going as fat as labels and management etc goes. Looking back at it, was it the right decision?

Yeah, I believe it was. Although it wasn't so much a conscious decision to go it alone. It was just the fact that no one was interested in releasing our stuff at the time. We felt we were ready and with the help of our management we set up our label and away we went. We were tired of waiting for things to happen.

What kinds of challenges did you encounter over the last three years going it on your own?

Well every day we come across new challenges, whether it's playing to a room full of people who don't know us and we have to win them over, or it's walking out in front of a festival about to play to thousands of people. We also had to learn very quickly about the way labels functioned and the way contracts worked etc. It was a pretty scary time but i feel we made the right decision for us at the time.

How do you go about approaching a mixture of hardcore and punk? Do you ever find it tough to stand out in a scene that can sometimes seem stagnant?

Well i guess the electronics are the main reason we stand out a little. I mean we have a lot of influences in our music, hardcore punk, alternative rock as well as a lot of dance music. It's easy for bands to stick to the rules and just write a hardcore punk tune, get accepted into the scene, along with a lot of other bands doing similar things, I feel thatâs the reason it can become a touch stagnant. We have never been afraid to expand our horizons, and try something a little out of the ordinary. We're not exactly trying to change the world with this, just trying to have a little fun and not be restricted by any rules. If people don't like it, fuck 'em.

Do you find it difficult to keep your name afloat in North America, being from the uK? Or is that something you really worry about?

Well we always knew its going to be tough to get our name up amongst the thousands of great bands North America has to offer. But we've always been of the opinion that if we play hard enough things will keep growing. So for us it's just a case of coming back again and again. It's certainly not something we worry about. The only thing we do worry about is that there never seems to be enough time in the year. We'd love to spend more time over in North America, but we also have responsibilities to play other places. I don't think being from the UK really has much to do with it. Too many bands from the UK think that just because they have done well over seas, they will immediately do well in North America. We don't think that at all, we're enjoying going back to the club shows, playing to anywhere between 30 and 400 people. It's all exciting again for us.

What do you have planned for the spring and beyond?

Well once we get back from our seven week tour of Japan, Australia and North America we will finally have some time to get into the studio. It's been far too long for us. This last year has been jam packed full of shows, so many that we've hardly had any time to start writing, let alone record new songs. We have so many ideas floating about. We're just itching to get into a studio and experiment with them. The first album felt like such a rush, we didn't have much cash to pay for a lot of studio time so it was pretty much get in and lay down the tracks. The album took about 2 weeks to record, which is nothing really. We had to do a lot of the mixing through emails whilst on the road as we were back out touring again. So it's going to be great this time around to get some real time to experiment and get the next album sounding as fresh and tight as we'd like it to.

Tell us a little bit about Ambush Reality and what's going on with that?

Ambush Reality is sitting dormant, quietly waiting to erupt a record from us. I think it's getting a little frustrated. Seriously though, it's just a case of getting the next record released. We don't have a lot of cash to invest in other bands at the moment and we don't want to run before we can walk. So for the time being we'll remain the only artists on ambush reality.