Since they were signed to Eyeball Records in 2004, The Number Twelve Looks Like You has successfully released one EP and two full–lengths. With the release of their newest full–length, Mongrel, the band has been proving their dedication and talent to fans everywhere. After wrapping up their tour with From Autum to Ashes, The Number Twelve Looks Like You will head home to New Jersey where they will be taping for their upcoming DVD, The War of the Worlds, at School of Rock South in Hackensack, NJ on December 15. Punknews.org's own Ronnie Raffaniello had the opportunity to catch up with one of two vocalists in the band, Justin Pedrick. 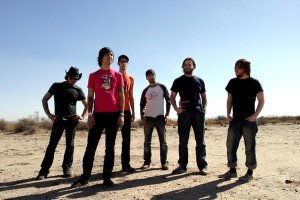 What is the story behind the name The Number Twelve Looks Like You?

Jase (the other vocalist) and I had a mutual friend who wanted to start a band for lack of anything to do. Ultimately, he dropped off the project and a few members who he had scouted stuck together and started jamming. The members were Jase, Chree (the original drummer) and I. Jase and Chree were friends prior and had a clue on some other people they knew who wanted to play music, and I had the same clue. Mutually, we recruited some folks we knew, thus forming our band, which originally went under the name And Ever.

Why did you decide to start playing music under the name The Number Twelve Looks Like You instead of continuing with And Ever?

We began under the name And Ever and wrote an out of print EP in 2000. After said EP we began to get more serious and collectively changed our sound. With this change of sound we decided a new identity would be appropriate, so we went for the name change.

Mongrel, released earlier this year on Eyeball Records, was produced by Casey Bates. What was it like working with Casey, and what has the response been from your fans?

Working with Casey was certainly a blessing. He understood what we were going for and where we were coming from and was very adaptable to our demands. We certainly got the sound and attitude we were going for, and we are very thankful to him for his patience. Our fansâ response has been pretty good from what weâve seen touring on the record thus far. I feel that fanâs feed off of new material, and we normally take our time in between putting out new stuff, so after a nice long wait, they seem to be refreshed with new songs. We hope our fans will grow with us as we grow musically

If you could describe Mongrel in three words, what would they be?

What are your favorite songs to play live and why?

âCiveta Dei âis bar none my favorite song to play live. It is a song we wrote years ago and still sticks in my mind as a tour de force of emotions that is presented by the whole band. We play a lot of songs that certain band members like for certain reasons, but âCiveta Deiâ is one song I can look around on stage and see everyone giving 110%.

I read in an interview that took place about two years after the band was formed where Jamie expressed that he wanted to play shows in California. Now that youâve had the opportunity to do so, did the state and fans live up to your expectations?

California was hit or miss. Southern California was especially memorable, because they gave us one of our first sold out crowds. Some of the more hip, A market areas were less receptive, but very flattering to us nonetheless. We like the weather and palm trees as well. Fuck it.

What has been the best thing about being in The Number Twelve Looks Like You and what is something that you look forward to in the bandâs future?

The best thing about being in this band for me is the freedom to express myself when the feeling arrives and never having to worry about backlash from my band mates. I have the opportunity to play songs that mean a lot to me and everyone else is behind me 100%. Becoming brothers with my band mates means so very much to me, and what I look forward to is growing musically and individually with these brothers of mine.

Who or what has inspired you the most to make music?

Personal experience is my biggest inspiration. And Tom Waits has musically changed my life. I didnât know where to go with that question, but I hope that will suffice.

You shared the stage with a lot of amazing bands, but whom would you really love to play with that you havenât had the opportunity yet?

We have been listening to a lot of A Wilhelm Scream lately, and itâs safe to say we would all love to play with that amazing band!

Out of all songs that you could have covered, why did you choose to cover the 1979 hit âMy Sharonaâ?

Youâd have to ask Jase about that one!!!

Would you like to add any final words to those reading this?

Iâd like to tell you, interviewer, to spell check this because I have been drinking cheap beer.