Protest the Hero are back with a brand new album, Fortress, a follow–up to their breakthrough effort, Kezia. Currently on the road supporting the album, Punknews.org's Moneenerd had a chance to talk with vocalist Rody Walker about the band 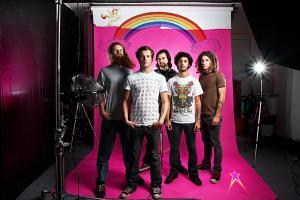 It seems like you guys are always on tour. Even in my small town of Fredericton, I know you've come through almost once a year for the past four or five years now, and Ontario ain't no drive down the road. I've never been in a touring band, so I really admire the fact that bands like you can spend weeks and weeks on the road with the same couple of guys every single day and not kill each other. How do you guys stay sane?

Is the band relationship, socially speaking, much different when you're on the road than it is off?

We don't spend nearly as much time together!

Speaking of touring, you're about to embark on a tour, at least through my area, with a hip hop band (The Trackdirtyaz) and an industrial rock band (Hypodust). Both are genres quite different than yours and not often seen playing the all ages scene. What are your intentions with this, or are you guys just good friends helping each other get some stage time? Are you trying to bring some more diversity to the table?

Diversity. It is exceedingly irksome to play tours that make too much sense. The kind of audience that we pride ourselves in having is open-minded to an unorthodox bill. We're trying to give people their money worth.

You've been an active band for a long time now, and have been prominent figures of the underground heavy music scene. As MySpace hair bands seem to be coming out of the wood-work by the hundreds, with an increasing fanbase to accommodate it, has this changed your perspective on underground music and it's culture? Has it helped or hindered your success at all?

We make every effort to steer clear of the scene. We try to be a part of something more permanent than scene music. A band should be more than a haircut. Hair grows.

Can you tell us a little bit what it was like to be in a young, touring punk band before the MySpace rage blew up?

I'm not sure it's any different now. For us, anyway. The internet is an extraordinary access point for drawing connections between band and audience. Those connections are maintained through touring and live performance. MySpace doesn't make real bands, but it helps them.

You're obviously a much more popular band now, having just released your third full length, and having good video rotation. How have the business aspects of the music industry changed for you? Has it made life as a touring band harder or easier?

Touring has become easier because we have developed methods to make it more comfortable. It is, in some sense, the art of normalizing in an abnormal situation. We don't have to sleep on floors anymore, but believe me we earned the knowledge of organized touring the hard way.

Name some artists/bands who have inspired Protest the Hero since day one.

Propagandhi! Now, musically, your band takes heavy influence from many diverse sub-genres of metal and punk, from mosh part hardcore to thrash metal, but judging by the new singles from "Fortress" you've released on MySpace, the band seems to be headed for a more power metal sound than heard on Kezia. Have you seen, and/or do you want to see, a difference in your audience as a result? Do you think fans of Kezia will enjoy this new release?

I think our true fans don't care about categorization. We haven't moved towards any genre, only away from them all. That portion of our audience that doesn't understand this will be dissolved with the release of Fortress. Good riddance to old thinking.

Above everything, what are the biggest differences between Kezia and Fortress, musically and emotionally?

Fortress is a greater concentration of our style. A band's career is a process of discovering their unique voice. Every release will be a closer example of the music in our heads. We have a long way to go.

Where'd the name Fortress come from? Does it have any relation to to Christopher Lambert sci-fi film, Fortress?

No, but that movie is hilarious. We think the connotation attached to the word Fortress reflects the kind of music we've written. All the songs are Fortress walls.