Mike Hale (In the Red)

In the Red, featuring Mike Hale, former guitarist and vocalist of Gunmoll and Brett Mathews from Breathe In have just released Volume I, their first album. With a recent split 7" with Git Some (ex Planes Mistaken For Stars), and several other comp appearances as of late, and having spent the last several years playing every house show and basement they could, including two self–booked tours. In the Red seems poised to send some ripples in the underground.

Volume I is released yesterday, April 15th and we're streaming the record at the band's profile page. 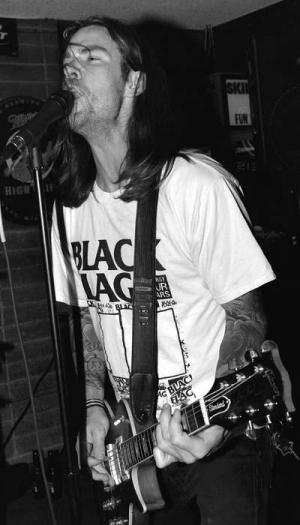 I recently sat down with Mike Hale, to talk to him about his new band, his new acoustic record on Asian Man, and what to expect next.

Alright, letâs start with an easy one. You were the guitarist / singer for Gunmoll. Brett was in Breathe In. What are your influences with In the Red, and are they the same as with your previous bands?

Wow. If thatâs the easy one, this could get rough. My main influences, I would have to say, are Matt and Brett. Lame, I know, but thatâs my answer. Itâs really different than any band Iâve ever been in. We just sorta feed off eachother, and basic riffs just sort of come together as whole songs as we play them. Musical influences, thatâs a much harder one. We all kind of have the same core groups that weâve been listening to for many years, such as Jawbreaker, Avail, Hot Water Music, Samiam, Leatherface, etc., but there is so much outside of that that we listen to. Brett is kind of a music junkie. He has headphones in, or a stereo playing, loud, at any given available moment, and you never know if you pull an earphone off and check in to see what heâs listening to, it could just as easily be Slayer as Boston or The Clash. Mattâs out in the practice space every night whether we have practice or not, so heâs always wanting to hear music, even if itâs just one instrument. For the most part, I would say we all listen to a lot of music made before â95, but bands like Off With Their Heads, The Ringers, The Anchor, those are all modern influences on us.

Volume I was released this week. Is there a story behind the record itself, or the making of it?

We had actually been a band for a little while before Volume I came to life. Before Brett joined, we had a couple other line-ups. I had just moved out to California from Gainesville, met Matt, and we knew that we had two-thirds of our band. We did a tour or two, and did a split with our friends at Tick Toc Records, with a band called The Genrevolta. When we came back from the Fest V, we parted ways with our then bass player, and Matt and I actually just started playing as a two-piece. I think thatâs when I really fell in love with this band. Brett and I had been good friends since right before the first Gunmoll album, and was always somebody I stayed in touch with. We were just talking one day, and I told him we were going at it as a two-piece, and we were having a blast, and he said something to the effect of "I wish I knew how to play bass, I would come rock out with you guys in a heartbeat." I told that kid to get his ass down to Santa Barbara that weekend, and weâd show him how to play! I would rather have a brother that we can let learn to play bass, then some ripper that just didnât fit in with the band. Luckily, it only took him about an hour to transfer his guitar knowledge to the bass! So, we all kind of looked at the 20 or so songs that we had, figured out what we loved the most, re-worked them, and went in and recorded them as fast as we could so we could have a disc for the Fest VI Tour. Rat Patrol was nice enough to say they would put it out for us, and here we are!

How did you hook up with Rat Patrol?

They had just done a couple releases for our friends. Brett has known the New Mexican Disaster Squad guys for years, and Chuck and I have a long friendship and history, and they both said great things about the label. He was genuinely a fan of the music we had made, so we were really happy to have him release it. He also has a great working relationship with Bryon over at Kiss Of Death Records, who has been just beyond amazing with helping us set this all up, and get it out. Bryon is actually in a great band called New Bruises, who we are supposed to release a split with here in the next month or so. I hope we get to work with him more in the future. Amazing guy. Really just loves music.

What have you guys been doing since The Fest tour?

Itâs been pretty nuts the last couple months. We have been writing every weekend. Brett lives up in San Francisco, and we live down in SB, but we have practiced almost every weekend since January. We have been just writing, demo-ing, recording elements of another record.

A new record, or a single? 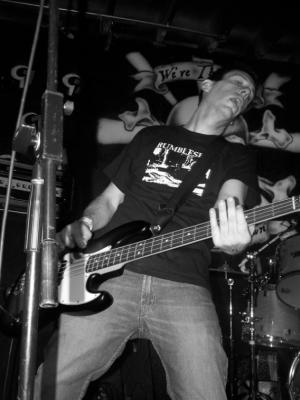 No, Volume II. And, yes, it took us forever to come up with a name that brilliant! (laughs) Yeah, we have 11 new songs all worked up, and actually mostly recorded. We want to stay busy, and we figure the quiet time before Volume I officially comes out might be the best time to dive in, and start working on new songs. We just got on a crazy roll, and started falling in love with all these new songs, and kept trying to get together as much as we could, and every time we got together, everybody had new riffs, or ideas. It was really organic feeling, the way it just came together. Yeah, I really like this band, with these guys. Iâm really proud of pretty much everything we have created to date.

And you just released a new solo acoustic album on Asian Man Records.

Now, thatâs different. I am proud of that, but in a different way. With In the Red I can attach the songs to ideas, and practices where we all came up with what we are playing. My solo acoustic stuff was just something I liked messing around with. Mike over at Asian Man was nice enough to put out a split with myself and Chris (Wollard, Hot Water Music) and we were both beyond happy that he even wanted to do that. When he expressed interest in a full length, I was really honored. Itâs still crazy that people buy that record, and that they get into it. Itâs really cool, but those were just songs that I wrote with my dog, and I sorta always figured nobody outside of the band space, or my bedroom would ever hear them.

Is your focus on your acoustic side, or your rock side more?

In the Red is my main love. Itâs all just song writing to me. With In the Red, I get to write with my two best friends. Like I said, even when it was just Matt and I, we were still playing shows. Now we get to play as a full three piece. I wouldnât say itâs my focus, itâs just what I would rather be doing with a guitar in my hand. Itâs all just music. We make what we love, and throw it at the wall. If it sticks, awesome. We are just excited to get back out there and play with and for our friends. If we make a new friend on a tour, that is an amazing tour to us! 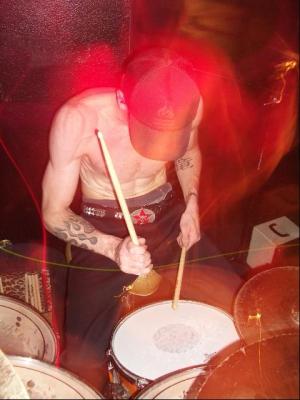 Thank you for your time and interest! I would love to say thank you, publicly, to Bryon at Kiss Of Death Records, Chris at Rat Patrol, Troy at Tick Toc, Steve at 1 2 3 4 Go! Records, and Mike at Asian Man Records. Itâs an amazing feeling to know that somebody believes in what you are making enough to put their money and time into it. All of those people work hard jobs to get a paycheck. Thatâs a lot of hours of work, both on and off the clock, because somebody thought our record should be heard. Thank you for believing in us!