Let's face it, everyone loves Asian Man Records. Whether it's the diverse roster, the great music, the charitable doings or the giant man who runs the label it's rare that anyone has anything bad to say about them. We're adding another reason to the list with a giveaway this week. Mr. Park has donated tickets, CDs, vinyl and posters from The Queers, Kepi Ghoulie, Andrew Jackson Jihad and Bomb The Music Industry! for a great contest. You can see the whole list below. All the included bands are schlepping across the country "Making Punk Fun Again" on the Asian Man Records Tour this summer and as such there's some tickets to be gotten as well.

AND entering is super easy. How you might ask? A few weeks ago we officially launched our Twitter Feed and the response has been amazing. So to reward those on the uptake, we'll be picking one user who is following us there to get the first, second, etc. prizes.

For those who haven't signed up to follow us yet, head over to Twitter, sign up and do it! I'll be picking next Saturday and you have until then. 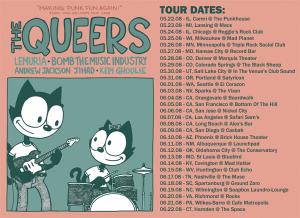 6Th Place-Tour Poster Signed by All the Bands