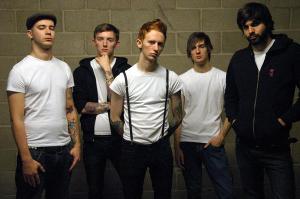 Popular rock/hardcore act Gallows have begun work on the follow up to their wildly successful debut full length, Orchestra of Wolves. They noted:

It's going well so far, we are writing at a rate of one new song every day so far. Hopefully we'll have alot of material to pick from for the final album tracks. Its a definite progression from Orchestra of Wolves and we're well pleased so far. It's all about the riffs.

We'll probably be playing a couple of new joints at the festivals in the summer, as we will have finished recording the album by the end of the summer holidays. Might even make a new one available before Reading/Leeds so you know the words.

While it is unknown who will be releasing the album in the States, the band signed a four album, Â£1,000,000 deal with Warner in the UK.