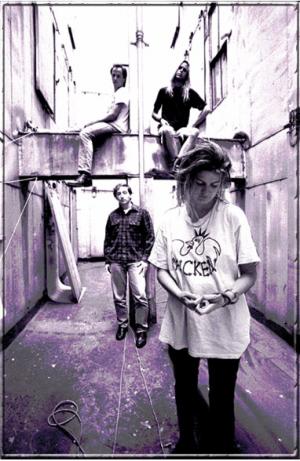 Contributed by BlackStud8InchesReal, Posted by Adam White Movies and Documentaries 14 years ago

The documentary film The Gits has been confirmed for a theatrical release on July 7, the 15th memorial anniversary of death of lead singer Mia Zapata. Screenings will take place throughout the US and Canada throughout the month. The Gits, described as "part musical history and part murder mystery," was directed by Kerri O'Kane and produced by Jessica Bender, Danny Goldberg, and Gits drummer Steve Moriarty. More information can be found at TheGitsMovie.com.

The Gits were a Seattle-based four-piece punk band that formed in 1986, releasing their debut album Frenching The Bully in 1992. By the summer of 1993 the band began recording their follow up, titled Enter: The Conquering Chicken. Popular in the Pacific Northwest and poised to break nationally, the band's career was tragically ended with the rape and murder of frontwoman Mia Zapata in July of 1993. The murder went unresolved for years until the 2002 arrest and 2004 conviction of her killer.

Bad Religion looks ahead to 2009 album