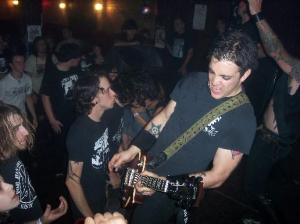 Contributed by prankrec, Posted by Adam White Prank 12 years ago

Celebrated underground Austin, Texas based D-beat act World Burns To Death will embark on their first European tour this month in support of their third LP The Graveyard Of Utopia.

The Graveyard Of Utopia was co-release by Prank Records and Japanese label HG Fact. It follows up 2002's The Sucking of the Missile Cock and 2006's Totalitarian Sodomy.