Transistor Transistor document their hospital adventure for us

As you may recall, Transistor Transistor recently had to cancel a number of tour dates after one of their members contracted appendicitis. The band had originally planned to keep us posted with a diary of their wacky touring adventures, but the exploding internal organ problem led to them instead documenting their wacky hospital adventure.

So, without further ado.

There are a series of preparations and routine checks before heading out on any tour. Working van? Check. Back up guitars? Check. Absurd amount of t-shirts? Check. Directions to the shows? Check. Non-inflamed Appendix? Eh…

I could picture her saying "I did not raise you to smoke marijuana cigarettes, read JUGS magazine and swap your urine!"

This last one has typically been left off of our list, and who could blame us? Usually a finicky or totally non-functioning van sounds the death knell for a tour, not a tiny little organ no one even needs in the first place. But, on the way to the first show of our tour in support of our new record, we were reminded that there are some things you just can't plan for, and sometimes they have to be surgically removed from your body.

We had ten dates booked heading out to Dudefest in Indianapolis, Indiana and back. Our new record had been out for a little bit and we were doing the requisite tour in support of it. We were all really excited to get back out on the road and play some shows, see some friends and get rid of some of the absurd amount of t-shirts we had. Ten days wasn't much compared to our past excursions, but it would be fun none the less. The first date was supposed to be at the Knitting Factory in New York City on Monday the 16th. The weekend leading up to it was spent practicing and going through the above mentioned list; I spent it wondering what the hell was going on in my stomach.

On Friday I started getting shooting stomach pains, but I chalked it up to eating some bad food and a cramp I got the day before riding my bike. The pain was with me bright and early on Saturday morning and I decided that the food was really bad and the pain would make its exit once the food did. I tried to ignore it as best as I could. Sometimes it was fine, other times it felt like there was a boxcutter fight going on in my intestines, which is something hard to ignore especially when it's something you would want to watch. 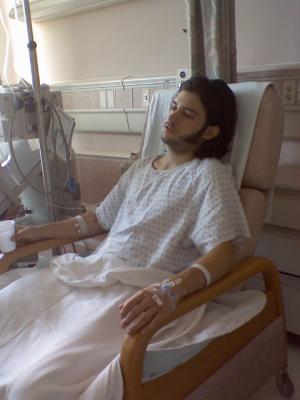 Finally, on the way down to the show on Monday I did something that I inexplicably had not yet done; I tried to locate the pain by pressing on my stomach. This is when I brought a serious anatomical question to everyone else in the band: "Is this where my appendix is?" The spot where my hand was at the time was indeed where my rotten appendix was. It was also the spot that seemed to be where all the pain was coming from. Being the medical super sleuth that I am I started to put a few things together. Garrison called his mom, who works in a doctor's office, and she confirmed that I had the symptoms of having an appendicitis.

After a little deliberation: "Maybe we should still go to New York, I bet there are good hospitals in New York." "Maybe we should turn around and go home." "What does Nat do in the band again?" "Maybe it's gas?" Garrison got online using his phone, found a nearby hospital and entered the address into the phone's GPS and off we went to Johnson Memorial Hospital.

My initial and lasting feeling, outside the shooting pain, was complete annoyance. This could not have happened at a worse time and it was obvious to me that my appendix was trying to secede from the union. We made it to the hospital after a seemingly long eight mile drive; we contemplated saving time and money by stopping at the Veterinary Hospital a few miles before our actual destination. While sitting in a parking lot across from the hospital, somehow we missed the actual parking lot; the guys prepped me for going inside: "You're not wearing your bullet belt right?" "You're not wearing a sketchy shirt are you?" These would prove to be worthwhile precautions as we were assumed to be urine swapping junkies once inside the Emergency Room.

I hobbled up to the front desk with Garrison and gave the receptionist my name, something I would do about fifteen more times before I could sit down, and told her I was pretty sure my appendix was on its way out. She gave me a sealed plastic bag containing a plastic jar for me to pee in. "They'll want that" she said as she handed it to me. Of course they would, who wouldn't? We sat, waited, leafed through gardening magazines and pamphlets about ovarian cancer and then I was called in to see a nurse. She took my blood pressure, temperature, I reeled off my symptoms for her and gave her the coveted plastic jar, now full. She called me buddy and sent me back to the waiting room.

When I had gone into the bathroom to dish out the goods, Garrison waited outside so he could give me a few reassuring words upon my return. Looking like the suspicious ruffians that we are, some voyeuristic staff member saw Garrison outside the bathroom and assumed that he came in with me. I can only imagine that this misinformation was given to my nurse in some Emergency Room pass-it-along game. The nurse came out into the waiting room holding my sample in its sealed bag and looking at the four of us angrily. "I'm throwing this out." She declared to us. Maybe she was just sick of her job. I would throw it out too, I mean, it is piss. "Whose is this?" She asked indignantly "Who was in there with you?" She was holding the bag by its corner between her thumb and index finger like an angry mother who just found a joint or a stained JUGS magazine in her child's room, too furious to really touch it. I could picture her saying "I did not raise you to smoke marijuana cigarettes, read JUGS magazine and swap your urine!"

What I learned from him was that I needed to have a CAT scan and that he was going to google my band and see if his blink182 loving son was into us; I assuredly told him "He probably is."

We were all completely baffled for a moment, but I spoke up letting her know that the juice was 100% mine and that "I'll sign off on it." Once it was all cleared up that I wasn't on so many drugs that I would swap my urine in a paranoid bout to avoid being caught with a dirty stream, they took my piss and we resumed waiting.

After a little while I was brought inside the ER. I abandoned my clothes for a very revealing johnny and started making friends with the staff. One of the most enthusiastic people I have ever met came in just as I was getting situated. Her enthusiasm was only matched by her desire to find out whether or not I had insurance. I had my suspicions that had I been uninsured she wouldn't have been the bouncing ray of sunshine that she was, but who can say really. After this the folks from the ER showed me a thing or two about who was and wasn't on drugs by pumping me full of so many painkillers that I won't be able to operate heavy machinery for months. I could feel my arm going numb right where the IV needle entered my vain and the feeling traveled up to my brain rendering me completely useless to all the people who had to harvest information out of me about my symptoms, health history and allergies. In a drug induced stupor I thought James came in to tell me that his cat had won a prize and would be featured on a $1 scratch ticket called Cat Scratch Fever. This turned out to have actually happened, amazing.

After this I spoke to a doctor. What I learned from him was that I needed to have a CAT scan and that he was going to google my band and see if his blink182 loving son was into us; I assuredly told him "He probably is." After the CAT can, which confirmed my suspicions of my defecting appendix, I sent out text messages to everyone I could letting them know that we wouldn't be coming to New York. Being someone who constantly makes shit up no one believed me, but the truth was my appendix had failed me and it was time to go under the knife. The guys came in and wished me the best; that is what my fogged mind could ascertain anyway, they could have all quit the band but my chemicals were so unbalanced that my only reaction would have been nodding, smiling and feeling really gooooood. 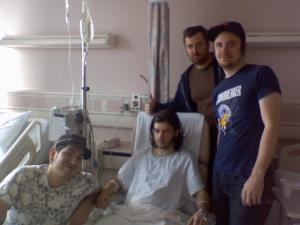 On my way to get gutted the people from the OR told me how the people from the ER are always stealing their gurneys. Jerks. One of my last thoughts was the scene from the Simpsons episode "Boy-Scoutz 'N the Hood" where Dr. Hibbert takes out a guy's appendix on the street after proclaiming "this man's appendix is about to burst" then hucks it off camera where it explodes like a grenade. It was a good thing I had such a solid understanding of what was going on grounded in stark reality. I was laid on the operating table, given anesthesia and the next thing I knew I was in a hospital bed. I no longer had an appendix.

I did have ten staples and more IVs which I took as a fair trade. Everything that happened afterwards was pretty boring unless you think the chronicles of someone doped on morphine watching VH1 all day and struggling to pee in some thermos-looking container are interesting, and if you do I'm confident that there is a website out there offering videos and photos of that very thing. I am not going to find it for you though.

In the end everything worked out, except the tour of course which we had to axe completely. Everyone at Johnson Memorial Hospital was informative, helpful and just great all around. A big thanks to the staff there and a big apology to all the promoters we had to bail on and anyone who was looking forward to seeing us play. Blame it on my appendix, I know I do. That crappy little organ is dead to me, literally and figuratively.