Mock Orange has announced the details for their debut on Wednesday Records. The record is titled Captain Love and is due out September 09, 2008 The album is the follow-up to the critically acclaimed Mind Is Not Brain.

The album was recorded over the better part of last year in Nashville, Tennessee with producer Jeremy Ferguson (Be Your Own Pet, Josh Rouse). You can check out some music from the album on their myspace page. 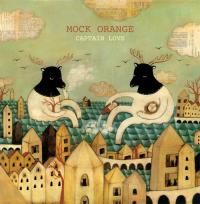 Tours: Children of Bodom / Between the Buried and Me