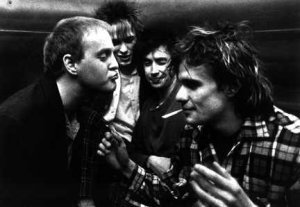 by Aubin Paul Rhino 14 years ago

On the heels of their recent reissues of The Replacements' Twin Tone-era material comes the news that Rhino will be giving the deluxe reissue treatment to the band's Sire-era material as well. Four of the band's major label releases are due September 23, 2008, with 1985's Tim, 1987's Pleased to Meet Me, 1989's Don't Tell a Soul, and 1990's final album All Shook Down.

Like the Twin Tone reissues, each album will be remastered and expanded with bonus material including recording sessions with the Ramones' Tommy "Ramone" Erdelyi and Big Star's Alex Chilton as well as a collaboration with Tom Waits.

Tickle Me Pink to carry on after death of Johnny Schou

Win a skate deck and vinyl from The Offspring