While the actual release date keeps getting pushed back, Minneapolis, Minnesota'a Banner Pilot really have finished their debut full-length, Resignation Day. The follow-up to their 2006 EP, Pass the Poison, shouldn't disappoint those who loved the band's blend of Lawrence Arms, Dillinger Four and Jawbreaker-esque punk rock.

Punknews interviewer Zack Zeigler talked to the band's vocalist/guitarist Nick and bassist Nate regarding their approach to the new album and what people can expect.

Have you noticed anything different about Resignation Day, the sound or the lyrics, opposed to Pass the Poison? What, if anything, persuaded that change in sound/direction?

Nate: Not really; I wouldnât say weâre "going in a new direction" or "broadening our horizons" or whatever. I think the songwriting is better, but weâre definitely not doing anything drastically different, like adding keyboards or anything ridiculous like that.

Nick: Weâll save that for LP #2 -- but we did try to mix it up the tempo more on this record! We play both speeds, 190 and 200 BPM. Lyrically I still draw a lot of inspiration from John Fanteâs books and write songs about lifeâs challenges and coping mechanisms -- yah know, screwy girls and drinking. 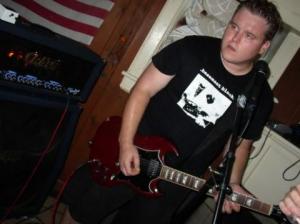 You released your first demo in 2005, whatâs changed in you as a band since that release?

Nick: We got a non-digital drummer! Heâs not as reliable and you have to feed him but heâs a better conversationalist.

Nate: Besides Danny [the drummer], I think that playing shows and writing songs has made us a better band since the 2005 incarnation -- but not really different. I guess itâs sort of like the first question, not to disappoint, but we havenât gone on any spiritual quests or anything over the last couple years. I like to think that the EP was an improvement on the demo and the new record is an improvement on that.

What message do you want your music, particularly Resignation Day, to get across?

Nick: Thereâs really no manifesto this time around. Itâs sort of all been said before. Meat is still murder, dairy is still rape, so on and so forth. Although, I recently heard the Brokedowns say on stage "you canât soar with the eagles if you stay out with the owls" and that seems like a pretty great message so maybe weâll co-opt it.

How have you been getting the word out about your new album?

Nate: We hand out tracks to people walking by, cold call strangers out of the white pages, etc etc. All the normal stuff. Plus weâve been trying new ideas like putting up songs on our MySpace page. Once we have physical copies in hand weâll be sending them out to magazines and distros and what not.

Nick: I know where Channel 11âs "backyard" is where they shoot the weather portion of the 10 pm newscast, we can hop up and down behind the fence and yell shit.

Nate: Yeah, and then if the news channel tries to give us shit, weâll just say we were reporting legitimate weather news. "This album is going to be a total hurricane of awesomeness!" or whatever. 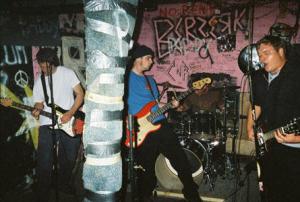 Nick: My favorite is probably 'Saltash Luck' or 'Empty Your Bottles'; on the latter I get to play bass because neither Cory or I can play that drone lead yet and sing at the same time. Thatâs strictly for the pros.

Nate: I like the song 'Cut Bait' because itâs a pretty fun bass line to play. I think the best song on the record would be 'Empty Your Bottles.'

If you could tell a kid thatâs never heard of Banner Pilot to listen to one song off the new record, what song would it be?

Nate: Uh, gee, I dunno. As I understand it, no one really reads lyrics anymore, so itâd be hard to try to get a message across to a kid unless you were strictly going with the song title. So I guess Iâd choose 'No Transfer' so theyâd maybe learn about the importance of getting a transfer when you ride the bus.

What does the term "sellout" mean to you guys?

Nick: Um, what our record will do once this interview gets posted on Punknews.org? (That was the deal, right?) What the guy at the liquor store tonight said happened when I asked where my favorite bottle of Rioja was? Basically donât change your music for money.

On your MySpace page you described your sound as a blend between the Lawrence Arms, Jawbreaker and Alkaline Trio. Were those bands your main influences?

Nick: I grew up listening to a lot of Screeching Weasel so thatâs a main influence for me. Weâre probably a hybrid of that with the rougher vocals of Jawbreaker/Crimpshrine/Hot Water Music. Lyrically, I look up to Blake (Jawbreaker) quite a bit, although Dingbat is pretty fucking sweet.

Nate: Mostly the first two. Not Alkaline Trio so much. Jawbreakerâs probably my favorite band, but we donât really sound like them. I mean, seriously, does anyone actually sound like Jawbreaker other than Jawbreaker? Not really. A few bands sound like Dear You-as-performed-by-a-computer-program (ie, they understand the basic formula but it doesnât sound right), but thatâs about it. We get compared to Lawrence Arms every now and then, and I can hear that, so itâd be fair to call them a main influence.

Whatâs the last show Banner Pilot went to that they didnât perform?

Nick: Nate and I went to see Tegan and Sara recently but swore we wouldnât talk about it. $8 Heinekens? Wtf? It was great though.

Nate: All four of us? Not sure, unless you count any of the various Fest shows.

For those who have never been, whatâs a Banner Pilot show like?

Nick: Itâs incredible. We usually open with me staring at Danny while he checks some knobs and dials on his cymbals and I try to gauge when we can start rocking. Someone probably yells out "Boner Pilot!" and 15-20 minutes of blistering punk rock follow sprinkled tastefully with awkward banter. If someone breaks a string, Nate may play the dungeon song from Super Mario Bros. on bass, or weâll break into a confused rendition of Lillington High.

Do you have anything special planned for the release of Resignation Day? If so, whatâs the plan and where will it be?

Nick: Dillinger Four was cool enough to let us open their 3rd annual "Dillinger Fourth of July" at the Triple Rock and hopefully weâll have the CDs by then. Itâs also Off With Their Heads CD release show, so it should be awesome!