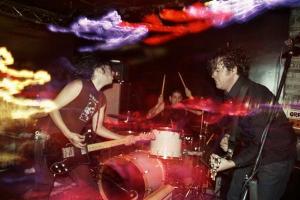 Punknews interviewer Ryan Raffin recently caught up with Transistor Transistor's Nat Coghlan to speak about their new album, Ruined Lives, as well as Coghlan's recent trip to the hospital to deal with a trouble-making appendix.

How are you doing? You had some trouble with your appendix recently.

Yeah, Iâm feeling a lot better than I was. Iâm not totally back up to speed. After the surgery your abdominal wall or whatever it is, is more susceptible to getting a hernia. I canât really lift things or ride my bike, which is a major annoyance, but aside from that, Iâm a lot better. It doesnât feel like my stomach is trying to commit a crime against me any more.

I saw the hospital report you did for the site, so I have to ask about the Cat Scratch Fever [lottery tickets]. 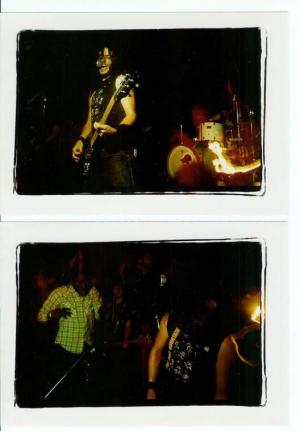 Thatâs a legit thing. At the time, the painkillers they put me on before the surgery, I have no idea what it was and why they just doling it out, but I was totally doped and James [Moller, drums] comes in, "Yeah, man, my catâs gonna be on Cat Scratch Fever!" Yeah, I guess itâs some New Hampshire state lottery ticket, some $1 scratch ticket, and his cat, along with seven others were all chosen as winners to appear on the ticket. Admittedly, Jamesâ cat is a great cat, and Iâm not a cat person, totally cool cat, and it deserves to be on a scratch ticket, but thatâs just fucking hilarious. The prize was fifty scratch tickets. Him and his wife are just gonna get fifty scratch tickets. It just seems like the most bizarre thing, theyâre not giving him cash, theyâre giving him potential cash. Itâs like "We could give you fifty bucks, but weâre giving you a chance at zero to maybe a thousand dollars." Itâs such a lottery thing to do, itâs ridiculous.

Are you guys going to be touring later this year?

Iâd like to, itâs kind of up in the air as to what we are going to do. Mostly just because Brad [Wallace, guitar] lives in Philadelphia, I go to school full time and I work, James works, Garrison [Nein, bass/vocals] works. None of us live with our folks, none of us do that racket anymore. We canât do the thing where you go on tour for a month and hope you break even, hope you come back and can pay rent, or stay in your parentsâ basement. Touring is a little trickier than it was in the past, especially with gas becoming increasingly more expensive. So Iâd like to, I donât know if weâll be touring, thereâll definitely be shows, bunches of shows here and there.

I saw you had some comments in an article [about gas prices] on some website, some Fox website.

Oh, that fucking thing. Curran the guy that handles our press stuff, said to me "Write something about gas prices," and I was like "Alright, youâre the boss," and it ended up on this Fox News thing about how bands are getting hit [by the prices]. Even more than the fact that gas is expensive, for me I honestly have to take a step back and say "Is this a legitimate thing to pursue?" You know, is going on a tour a responsible thing to do at this point in time? And not responsible as in "Should I go to college?" or "Should I do whatever else?" but "Should I be driving a massively inefficient vehicle around the country to play shows?" When youâre buying gas, itâs not going to anything good; itâs going to the opposite of good things. George Bush and Dick Cheney are oil men, youâre supporting these guys, this is where the money is inevitably going. Is what Iâm doing, selling a bunch of seven inches and t-shirts in halls and small clubs, is that a legitimate reason to go out and pollute and spend all this money? For me thatâs the biggest thing about the gas price increase.

Itâs having an adverse affect on all bands touring, all small bands at least.

Yeah, it really is. The thing is, a band like us, we donât see money from record sales. Way more people downloaded our record for free than bought the record. Iâm happier people have it, but weâre not seeing any money unless we are physically selling the CD to someone at a show. A band our size, you get your money playing shows. Youâre not getting money anywhere else, unless you sold your song to a car commercial or some garbage. It stumps everything. If the vanâs broken, you need to come up with some money to fix the van by playing shows, and you canât make any money from shows because gas is like $4.50.

With the new album, do you have a favourite song?

Itâs hard for me to pick a favourite song, Iâm more of a favourite album person. If Iâm in a car with someone and they have an iPod on shuffle, itâs quietly driving me crazy. I need to listen to albums. Itâs hard to pick a favourite, but if I had to Iâd probably choose "Ghost Hands" just because itâs so different. For me picking a favourite song, you know, you recorded the thing so you have all the experience about why itâs your favourite. "Oh itâs my favourite because it has this context" or "It was my favourite to record." I really like "Ghost Hands" as far as the writing and recording process, and then the end result. We never play that song live. I would say "Pillar of Salt" is my favourite song to play live.

It took a few years for Ruined Lives to come out. Will the next album take as long? 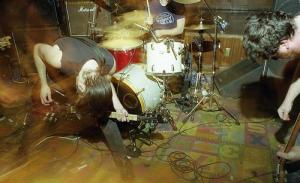 Hopefully not. I donât think any band goes "Alright, weâre gonna make [listeners] sweat for this one." Weâre not delusional enough to think that people are sitting around with bated breath waiting for us to put out a record. We wanted it out a lot sooner, but Brad was living in Philadelphia, James was in the process of getting married. We didnât have a set practice schedule, because of that things happened a little differently. It just took longer, scheduling time to record wasnât a totally smooth process. People werenât all in the same place. When we did our last record [2005âs Erase All Name and Likeness], Brad and James lived across the street from each other, and the practice space was a quarter of a mile down the road from them. I just drove down, our bass player at the time, him and James lived in the same house. Now itâs all a little bit more spread out, having a job makes stuff harder, though Garrison, James and I all live a little closer to each other, we have a practice space. Hopefully weâll be more productive, and it wonât take us as long.

For me, the prime advantage of being on that label is at this point we have a history with the label. Greg Drudy, who runs Level Plane, heâs a friend of mine at this point. He was the first person that ever decided that this band should have a record out. When I call him to find something out, Iâm not talking to some intern. I talk to him and we shoot the shit. Sometimes I wish there was that intern to just give me little bits of information, but I wouldnât want some sterile relationship. He doesnât say thing one when weâve got a dumb idea. Maybe not dumb ideas, but what other people would consider questionable marketing decisions. Our last two releases, the 7-inch and the full-length, they donât feature the bandâs name or the album title on the record. With the CD we ended up putting a sticker on it. He didnât want it to be completely without the band name and album title. He didnât change the album art, he made us put a sticker over the plastic. Iâm fine with that, you know? Heâs not saying "I donât know guys, this might affect your scans," he lets us pursue what we want to pursue.

I saw the press release for Ruined Lives, and you mentioned the bandâs love for foosball. Was that just a joke or were you serious?

No, thatâs a completely legit thing. Iâm not even sure what our press release looks like, but the foosball thing, totally. Press releases are usually the most masturbatory, hyperbolic garbage, and I wouldnât be surprised if ours felt into the category with that, but foosball, 100% legit. In our old practice space we had an old foosball table which I just went and purchased one day, because I just wanted to play foosball. While we were writing Ruined Lives, every practice included at least one foosball game, if not a two out of three, or two separate two out of three games.

Whoâs the best in the band at foosball?

Thatâs sort of tough. The way it breaks down, Garrison and I play on one team, and Brad and James always play on the other team. We call that "the Classic," because thatâs the classic line-up. Brad and James would typically beat Garrison and I, but after game after game after game, I like to think my incessant shit-talking wore them down. Garrison and I have started to take most of the games. The last game we played, Brad was back on top. It was the Brad of yesteryear. We all pretty much hold our own. Iâm massively unreliable, I might play the best game, I might score six goals from the back, only let two goals in. The next game, I let five goals in right off the bat, donât get in anything, I just blew the entire game. They all call me the goofball, I might play amazingly, I might totally suck.

[Laughs] That was good. If youâd asked me this a week ago, I wouldâve said Batman, no fucking questions asked. Heath Ledger as the Joker looks great, Christian Bale totally doing a good job as Batman. I saw the previews for the new James Bond though, and it looks like heâs just a maniac. It looks like a totally different James Bond movie, heâs not trying to stop the Russians from getting a diamond on the moon or some garbage. Heâs on a revenge kick. It looks like a revenge movie, but itâs James Bond, whoâs got a watch with a laser in it. I dunno, Iâd still say Batman, whereas before I never would have thought of going to see the new James Bond, definitely gonna check it out. James Bond just wasting dudes with an AK could be mad, that might make for a good hour and a half.

Russia considering legislation to crack down on emo