Rarities album from The Vandals

The Vandals will be releasing a rarities album on August 12. BBC Sessions and Other Polished Turds will be released only digitally, with the band promising "A collection of the bands most rare tracks all sharing one thing in common in that they were recorded when the band didn't give a crap, so they are fun, funny, and unpretentious." The Vandals are currently on the road with The Warped Tour. 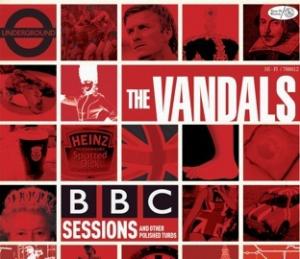 Some may think this is a joke, or a hoax, but over the years the Vandals have indeed recorded over a dozen songs for the BBC, mostly for BBC 1âs Lock-Up Sessions with Mike Davis. Here are some of the best from those sessions featuring some ZZ Top, Sublime, Queen, and a tear jerking piano version of the dead pet lament "Canine Euthanasia."

The cover songs come from ancient Ramones tributes (try to find any better Ramones renditions than these - impossible), lame Alice Cooper tribute albums, and even a Japanese Disney tribute. The gayest of the gay, however, has to be the Vandals version of the song 9 year-old Jimmy Osmond topped the U.K. pop charts with for 6 weeks in 1972 "Long Haired Lover From Liver Pool." Think of this release as 20 years of people asking for extra songs and the Vandals delivering in their own special way.