Tiger Army, Rise Against to appear In "Nightmare Revisited"

Tiger Army, Rise Against, Flyleaf, Korn, Marilyn Manson, Shiny Toy Gun and others will be contributing tracks to the upcoming Nightmare Revisited. The compilation is the second set of recordings associated with 1993's Nightmare Before Christmas with a previous set of covers coming in 2006 and featuring takes by Fall Out Boy and Panic At the Disco. 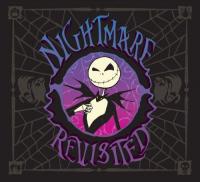