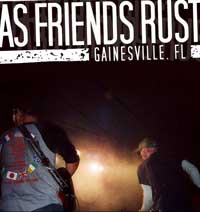 Gainesville, Florida's As Friends Rust have confirmed the rest of their European shows this month. Along with dates in the UK, Germany, Austria and Belgium the band will be playing one hometown show in Gainesville on August 15th.

The band's prior run ended with the 2002 release of A Young Trophy Band in the Parlance of Our Times. The remnants of the group evolved into Salem, which only lasted until 2005. Since then members have played in a number of projects including Damien Done, Moments In Grace, Bread Riot, Goodnight at the End of the Tunnel, Feathers, ROM, Currents, J. Page, the Drake, GATORS! and How Dare You.