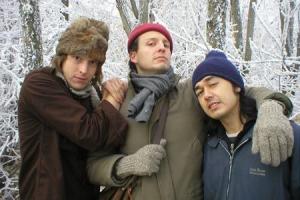 Portland, Oregon's 31Knots may not be known as the most accessible band making music today. However, their latest album, Worried Well, released this year on Polyvinyl is about as catchy as experimental post-rock gets. Our very own Jesse recently caught up with the band's vocalist Joe Haege to talk about what the band has been up to.

Worried Well sounds huge, but the scope of instruments you actually use is fairly small. How much do you use samples, and how do you go about arranging the songs you've written?

I love using samples in music. I think all of us, like many people with music, have grown pretty tired of just guitars bass and drums. The context has been thoroughly explored and pillaged. Of course, you can still have someone come along and do mind-blowing shit with it, but itâs not as common. As for arranging, I usually think of ideas that I would love to do if I had an endless supply of studio time, amazing musicians and singers and then I try to find a sample that fits the idea. Sometimes, though, it can be as simple as finding a keyboard sound I really like and writing a melody that I like with it, like "The Breaks." Thereâs a beauty in samples because if you mash them up in a weird way they can sound unlike anything you've ever heard, except very familiar. Most of the sound for this album, though, would be the giant room we recorded in and the mixing that Ian Pellicci did on it. He made it sound really big and full. 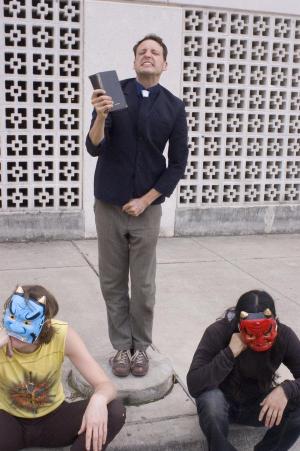 The keys on "The Breaks" have almost a retro '80s synth-pop tone to them, and "Upping the Mandate" conjures up the word "disco". Any reason for pushing towards established music forms when your previous catalogue has generally been un-definable?

In my mind underground / punk music is never a static thing. its always changing, and I like that. The Minutemen, one of the most scorned punk bands of their generation, lived and breathed the ideal of turning the definition of punk on its head. I think we're trying to carry that torch a little. I would argue that using established music forms in a different approach is un-definable.

Also, I think as time goes on and another generations music genres / trends pass they become another layer of pop-culture trash that can be mined to make something new. I don't think anyone in their right mind would listen to "upping the mandate" and get to the third minute and consider it disco. It's a different approach to mash-ups and, in a way, I think it is the last frontier of trying to strive for something original. Thatâs really a huge reason why I like writing with those kinds of sounds. Also because I love neat keyboard tones and I'm growing ever-tired of my guitar style

. When working on a new album, is there an overall concept that comes before the songwriting?

I have to laugh because I think most people would think not, and that it's just this scattered mess of songs. However, yes, I feel like I get concepts. We don't collectively work off concepts because I think it gets tricky trying so hard. Maybe one or two songs on the record we had an extended dialogue about. Our next album, though, I could see us reaching a point where we want to all reach a consensus on a concept. Its interesting because I've wanted to have our last 2 albums be "concept" albums, having them be very thematic and loaded with imagery tied into one subject. But when push comes to shove I can't do it because I know most people have a bad taste in their mouth with that sort of thing. Hell, I kind of do too. I just think its worth it to try and be ambitious, as long as its not done out of some sense of ego.

The title of the record came about after a handful songs had already been written, but it really helped bring it all together to me. I stare at the world and I see a lot of fear and a lot of fright. I also see some people tired of living that way. They want to be "well" and healthy. Then you have other corners of the world where it is so unbelievably ugly, sad and violent and people only think about their tiny ration of rice and not starving to death. Those people have worry unknown to myself and most people I know. They are well-worried. I guess that's why I love the title. You can flip the meaning around in so many different ways and it cuts from any angle. It seemed to make sense with the way the songs came out.

Your music fits more into an abstract category, lyrically and melodically. Will that make a full concept album easier or more difficult to realize?

Well, I guess I always think of concept albums being more about the theme of the lyrics rather than the music. It might make it more difficult, though.

31Knots received a lot of initial praise based around your guitar playing. Is the turn towards keys an attempt to escape being pigeonholed?

Absolutely not. I have a curse of my own, which is caring about whether or not people like or are effected by my music, yet it never influences the kind of music I make. I started writing on piano because its new and exciting to me. I've actually been writing on it for five or six years, but kind of just hitting a groove where it feels right in the context of rock music. I guess the overall approach of the last two records was more eclectic because we were getting tired of Math Rock land, but not because we were getting pigeonholed. If anyone does the pigeonholing it's us.

There seems to be a fair amount of pressure being in a band that defies definition; a colleague of mine actually had to hand Worried Well over to me for review because he was having trouble getting head around it and knew that I was a fan. That's the sort of thing that 31Knots fans almost brag about - "getting it." Do you feel that there's pressure to perform to a certain level of experimentalism/abnormality/etc.?

That's really interesting to know. It just blows my mind that people might think of us as something defying definition. I think itâs pretty easy--we're 31knots. We are a band that tries to challenge ourselves in the process of growing and writing new and different music. I think what is usually hard is that we kind of approach albums from the '70s approach, meaning that the whole album defines our "sound" as opposed to a track. It's flattering in some sick way that we could be a band that people have to "get," but it is definitely not our goal. We listen to our album and hear pop songs. We just try to write them in a unique fashion. As for experimentalism and abnormality…fuck…I'm at a total loss. Each song is based around a few key melodies, all but one has vocals and most run in a verse/chorus fashion. If there ever is pressure it is to not be too weird. There is this strange no-manâs land that we inhabit: not weird enough for people who like weird music and too weird for those who like rock and pop. All I hope for at this point is that we go down in the books as a band that really tried to make something that was unique, be it poppy or weird. 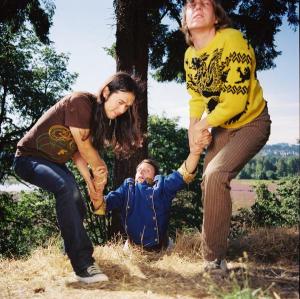 A band's influences don't necessarily add up to the albums they listen to in the van while touring. What's on the 31Knots touring playlist?

That would be a little easier once we're on tour, but personally I've been listening to a lot of Studio One ska compilations, Bo Diddley, Lydia Mendoza, Fats Domino, Colleen and Minutemen.

I imagine some cities have bigger audiences for your shows when you tour. Do you ever get disheartened by a low turnout?

I'd be lying if I said no. Our first tours as a band, meaning like the first 10, were all low / no attendance and it nearly killed our morale. But we just kept playing thinking it would get better, and it has. Europe is the place we play and we always have great turnouts, except for the Netherlands. Lord knows why. So, itâs still hard to play shows to a few people, but now we just try to make the most of it and still play our hearts out. Playing "aggressive" music, though, to a room sparsely attended is a really strange thing that I think will never get easy.

Is your writing process stop and go, album by album, or are the wheels consistently turning.

I can't quit writing music. I've tried but it doesn't work. I always have a few songs cooking. As for the band, yeah, we are stop and go. Jay W. and I don't really practice unless Pellicci is in town. That kind of drives me crazy and I'd like it to change for our next record, which I already have at least six songs for. This time, though, I might try to be a little more selective.

What does the distant future hold for 31Knots? Plans? Aspirations? Secret schemes of world domination? Fuck, I wish I knew. I think we've been saying for the last 3 records that "this will be the last record." Realistically, we don't get ahead of our debts created by the band. We're a losing money venture that isn't really growing in a fashion that can afford us the luxury of continuing to operate the way we have been. Not to mention that people don't buy records that much anymore. All that aside, though, I really don't know. Jay W. and I have been friends since we were 17 and now we're in our 30's. I think making music together, in some capacity, is how I live my life. And Pellicci is this great friend that needs a good excuse to come up to Portland and frantically practicing for a rock show or recording is a great one. I really love my band-mates and I love knowing that we / I have always stuck to some weird tacit directing voice of how we will write music. It's never been defined by trends, though it is definitely influenced by the music and art that we are inspired by. Itâs a good and "spiritual" reward.

New Music Roundup: A Lull, The Singularity, My Doll