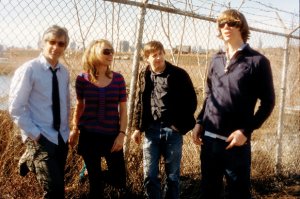 by Jesse Raub Matador 12 years ago

New York, NY's Sonic Youth have announced that they have signed to long-standing indie label Matador Records. The band's contract with Geffen and Universal Music Group recently ended. No word on whether or not the Thurston Moore imprint Ecstatic Peace will retain it's relationship with the Universal Music Group. The label had this to say:

For Matador, the opportunity to work in partnership with a group who've made such an profound impact on our roster/hometown/collective consciousness was one to jump at. Kim Gordon, Thurston Moore, Lee Ranaldo and Steve Shelley will commence recording the new Sonic Youth LP/CD this autumn and we look forward to sharing further details in the very near future.

The band last released Rather Ripped in 2006, completing their contract that had the band signed to Geffen for two decades. Sonic Youth is due to release their new record through their new label in 2009.

Fear Before The March Of Flames become Fear Before, plan self-titled full length