“All Aboard: A Tribute To Johnny Cash” with Bouncing Souls, Dresden Dolls, Chuck Ragan, Smoke or Fir

by Aubin Paul Anchorless 12 years ago

Anchorless Records has finalized the release date and track listing for their upcoming tribute to the late Johnny Cash. The tribute is titled All Aboard: A Tribute To Johnny Cash and is due out October 21, 2008. It will feature The Bouncing Souls, The Dresden Dolls, Ben Nicols of Lucero, OnGuard, Chuck Ragan, Joe McMahon of Smoke or Fire and many more.

All profits from the album will be donated to the Syrentha Savio Endowment (SSE) which provides financial support to underprivileged breast cancer patients. The vinyl version of All Aboard will feature an alternate version of "Delia's Gone" by Ben Nichols of Lucero. Expect a full album stream to be featured on Punknews.org starting October 21. 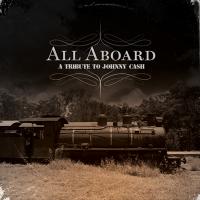