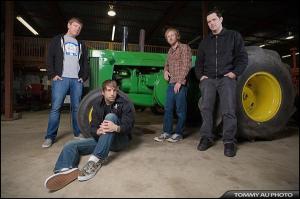 Our very own Darren McLeod was recently lured into the back of a van with fellow British Columbians Carpenter. They discussed John Cougar (Mellancamp), the band's US touring plans, and singer Dan Sioui's recent internet purchase of a… farm. Carpenter released Law of the Land this past June on Smallman Records.

Alright, I am here withâ¦

And Dan, what do you do in the band?

I sing and play guitar.

Now, earlier this year you guys released Law of the Land. How has the reception been to the record so far?

It's been super positive, actually. I'm always amazed at just how positive the response has been and the wide variety of people who seem to be responding to it. The nice thing I think about the record is that it has songs that can appeal to a lot of different kinds of people and a lot of different genres of music. So, you know, we sort of have punk kids, and there's a lot of songs on the record that they seem to gravitate towards. And we have some mainstream radio people that like other songs. But definitely, it seems like the main response is that it is a really well-rounded record and works well as an album, which I think is a bit of a lost art these days. We really put a lot of care and attention to it playing out as a record and taking the listener on a bit of a journey. It wasn't just, "let's throw these songs on!" We spent a ton of time on the details, even the length in between songs. With all the records we love, they sort of have that feel, of a true full length album and that's something that we really noticed and paid attention to, and then tried to do with our record. 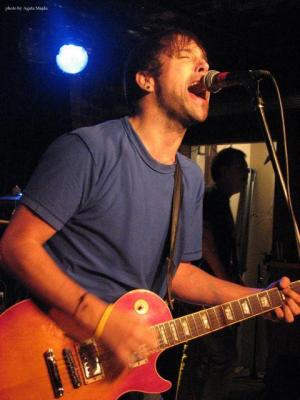 And I think the record shows that with the narrative that sort of strings forth about independent farming. On that note, one of the questions I have is to ask what made independent farming the big issue with you guys. You really push it, I mean, it's on your t-shirts

You don't sell organic produce yet at your merch table

No, not yet, but ideally I would love to (laughs). It's kind of hard to say. I think, for me, it came about just from living in Vancouver, and obviously there's a lot of environmental awareness thereâ¦

And some fantastic farmers markets

Yeah, definitely. And I guess the other side of the coin is that I work in the downtown east-sideâ¦ sort of in the heart of "junkie-town," and, um, I spent quite a bit of time trying to escape that world. I think that farming and a rural lifestyle is the most opposite you can get from that sort of decrepit urban environment that I find myself in every day. So, spending a bit of time with farmers, I just couldn't believe how much struggle they were going through. And then, once I became aware of it, I thought it was amazing that we weren't hearing more about this. There's this whole community of people that areâ¦ well literally, every day is a struggle, and I started to educate myself and learn more about it. I realized what a dire straight a lot of those people are in, and I felt like, wow, this is something I actually feel passionately about, and can help bring some awareness to it. And it's strange, because I don't consider myself a political person, or this band a political band by any means. It was just something that I really got into and felt passionately about and it just came out in the lyrics and the music.

Drummer JJ Heath comes into the van and grabs some Twizzlers. He quietly watches.

Subsequently, I actually bought a farm in Ontario off of the internet. I figured it was one of those situations where I better put my money where my mouth is. So now, there's this huge patch of land in Ontario where I need to figure out what the hell I'm going to do and how to survive. I think that will be an interesting challenge and will likely help writing the lyrics for the next record. It will ring all the more true now. Iâve also started a blog to document my ineptitude at www.hardcorefarmcore.blogspot.com. When I was younger I had to work a couple days on my uncle's farm. They're seed farmers in Norquay, Saskatchewan. My goodness, I don't know how they do it, it's hard work.

But it's a family tradition, goes back a couple of generations and they love it.

Yeah, people have really taken to the message. Not just in the prairies, Alberta or Saskatchewan where people are like, "Oh my God, I can't believe you're singing about this!" But even in the urban centers, like Toronto and whatnot, people are still saying that they're really excited that we're helping to at least bring some awareness to the cause. So it feels good for us.

We've got another band member here in the fold. Anything you'd like to add to that, or are you just happy with those Twizzlers right now?

D: This is JJ Heath, drummer extraordinaire and back-up vocals. He's doing more and more vocals these days, which is great. 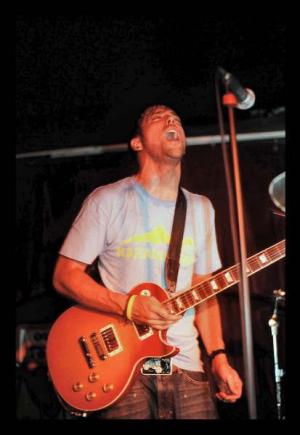 J: I'm just happy with the touring and the response that we get from people. And the positivity. It's been really good.

D: Yeah, that's something that we reallyâ¦ it sounds clichÃ© and cheesy, but the best thing about this band is how we all get along and the shows are really positive. People singing and dancing at the shows. A real community type feel.

J: Touring with Strike Anywhere was definitely an eye-opener. Those guys are all the same type of band, and when you tour with people who are like-minded, it makes the whole experience more enjoyable. When everyone's getting along, it's a complete contrast from some bands that hate life.

D: Who just seem to prey on negativity.

J: Their music is reflective of how their lives are.

On a side note, I was bummed that your tour didn't go to Victoria. You guys, Strike Anywhere, This is a Standoffâ¦

D: I know! We were likeâ¦ what do you mean it stops right there?! So close to home! We were so bummed.

J: We tried to convince them all…

D: We got a lot of emails from BC people saying, like, "Screw you guys! You're too good for us?"

D: We tried to explain, "no, it's not us!" We were talking to Strike Anywhere, trying to get them to drive and do it.

J: For the record, they all wanted to come out to BC. But, their budget wouldn't allow for a 12 hour drive over mountains.

J: Well, which does he prefer right now? He prefers…

D: He lost the Coug.

J: See, that's when it all went downhill to me.

D: Yeah, you can't go wrong. I mean, "Hurts So Good," "Jack and Diane," those songs are just timeless.

J: He'll always be the Coug in our hearts.

D: I mean, you can put American Fool on at any party and it doesn't matter who's at that party and I guarantee you that people will be tapping their toes and singing along in no time.

Some of our American fans were wondering when you'd have a chance to get down to the US of A and play some shows down there.

J: We're actually hoping to do a bunch of American shows in November.

D: We're talking with our friends in Living With Lions about doing some shows in the States. Mid to late November, I think.

Escape that BC winter.

D: Actually, we've been getting tons of emails from the Midwest. I don't know if it's the farming connection, but definitelyâ¦ Illinois, Iowa, and Kansasâ¦ we keep getting tons of messages on Myspace. I just got an email from Austin, Texas saying that we had to come downâ¦ they offered a place to stay and beers! We've got to do that. I think we've all toured a little bit in the States before, but not as often as we'd like. And any time we can escape the rain and the snow, we're down with that.

J: Yes, it's in the works and especially attractive in the wintertime.

Of course! Well, thank you guys so much for taking the time out to do this.

D: No problem. Thank you.

Music: All-American Rejects: "Give You Hell"