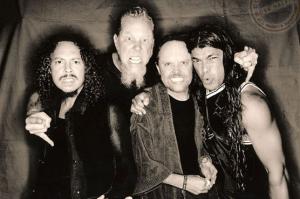 Metallica, Run D.M.C. and The Stooges are among those nominated for the upcoming 2009 induction into the Rock'n'Roll Hall of Fame. They share the nominations with guitarist Jeff Beck, singer Wanda Jackson, Little Anthony and the Imperials, War, Bobby Womack, and disco and R&B group Chic. This is the second nomination for the Stooges. The proto-punk pioneers were previously nominated in 2006.

The five nominees who garner the most votes will be announced in January and inducted April 4, 2009, in Cleveland. To be nominated an act must have released its first single or album 25 years prior. The ceremony has been held in New York City for the past few years, but is returning to Cleveland after more than a decade.