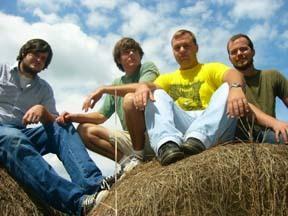 Georgia's Ninja Gun are still riding the crest of their latest album, Restless Rubes, released earlier this year on Suburban Home Records. What's more, the band will be playing The Fest this Halloween weekend in Gainesville, Florida. In our first in a series of interviews with bands playing The Fest, Michael Dauphin chatted with Ninja Gun's Jonathan Coody.

You fellas hail from Valdosta, Georgia.
a) Where the heck is Valdosta? b) How has the rural environment in which you reside shaped or impacted your songwriting?

a) Well, if youâre heading South down I-75 through Georgia, itâs the last town before you hit Florida and start heading North again. ESPN just named us Title Town USA because we kick so much fucking ass in high school football. Lowndes High School is ranked number two in the nation right now amongst AAAAA high school teams. Valdosta High School, which is the cross-town rival, is the winningest high school team ever. My buddy Will from The Grabass Charlestons was pissed because Gainesville was also one of the towns in the running for Title Town, but they ultimately came up a little short of my hometown. Also, Enos from TVâs "The Dukes of Hazzard" is from Valdosta. The guy that wrote Jingle Bells is from here too. Doc Holiday was from here, but he finally decided that it sucked and he moved out west to dry out. The comedian Bill Hicks is from here also. He made a career out of hating this place.
b) I was thinking about this the other day on the lawnmower. Everyone in this band is a product of the South. Jeffrey and I were raised in a more rural environment than Thad and Jake, but the basic mentality is the same all over the South. If you hate the right people, work the right jobs (insurance, air-conditioning repair), go to the right church, and donât ask any questions, you can do just fine around here. If you just fall in line and drink the sweet tea you can become a part of "The Good Old Boy Network" and life can be really easy. The best part about it is you donât have to think for yourself. You just adopt the belief system of the least educated / most mal-informed person you know and youâre set till you die. We just couldnât buy into that I guess. Maybe we, as writers, want to know if thereâs anybody else in our situation that feels that way. I donât know. I think being discontent with our immediate environment has been the catalyst for a lot of our songs here lately. There are redeeming qualities though. The foodâs real good. I think the best writers write what they know. When Ray Davies of The Kinks wrote their album "Village Green Preservation Society" he was attempting to make sense of where he came from. At the same time he was rebuking the things he didnât like about it while highlighting the things that were good and reputable. He could write those great songs because he had a firm grasp of what he was talking about. That gives you a lot of colors to paint with when you write. I think people will ultimately connect with a song thatâs honest and not pretentious.

While your music is primarily of the pop/rock/alt-country influence, you guys tend to appeal to punk rock crowds as well. Whatâs your take on that?

I donât know what Alt-country is. If wading through hog shit all my life isnât country then I must be living in a parallel universe or something. That noise on the radio isnât country and I refuse to take a back seat to it. When an Australian pretty boy whose last name is fucking Urban is topping the country charts people should check their bullshit detector. All that stuff exists to give Hummer driving football moms a boner. Itâs not art. Itâs commodity. Nashville sucks. Always has. The best stuff comes from the dirt because itâs real and it has to struggle to exist in a sea of practicality.

I think musically weâre a mixture of whatever weâve listened to all of our lives. Itâs really important to listen to a lot of music so you can filter it through yourself and use it to articulate whatever moves you to write a song. If you limit yourself by only listening to one type of music your sound is probably going to be some homogenized bullshit like a lot of the haircut bands that are polluting ears these days. Limiting the scope of what you write or how you write is never a good thing. Being easily categorized may make it easier to sell records or get laid or whatever, but it ultimately makes for bad art.

As far as the punk thing goes, yeah weâre that too.

I understand that you work on your fatherâs farm. What kind of work do you do on the farm? Considering the polar opposites here, is it difficult to balance farming with your job as a touring musician?

We got home from a two-month tour out West about a month or so ago and the day after I got home I was out in the middle of this huge peanut field by myself pulling pigweeds. They mess up the combine when you harvest if you donât pull them up. Anyway, Iâm out in the hot ass middle of the day in this field and I started thinking about how it seems like I lead a double life or something. Iâve never had any aspirations about farming myself. Its shitty work and you donât get paid for it anymore since our government decided to deregulate and let corporations decimate small family operations. Itâs the death of that way of life and itâs sad.

Security is very important to my folks because they know what itâs like to struggle. Iâm sure itâs hard for them to grasp the idea that I want travel around in a van playing songs I wrote in my underwear for little to no money. I went to college and got a degree because thatâs what youâre supposed to do and it helped me prolong my youth to some extent. Iâve had several soul crushing jobs. For the last two years I worked for a restoration company and had to go around and talk to South Georgia insurance adjusters about fire, water, and mold damage. Thereâs only so much you can say about mold. The acquisition and preservation of security can prevent you from doing what you know youâre supposed to do if youâre not careful. Ultimately I decided that trading my happiness for a 401k was not an option.

Helping my dad on the farm is good for me when Iâm home. It keeps me from sitting around the Trailer of Tears (the double-wide that Jeffrey and I occupy) hating life. Iâm writing a song about the dog days of summer down here. Itâs going to be called "Tropical Depression."

The production value on your newest album, Restless Rubes, is near immaculate and Iâd imagine you werenât recording with a major label budget. How were you able to achieve such a sound?

There are two main reasons. Firstly, Jeffreyâs dad owns J&Jâs fried chicken in Quitman, GA and he believed in us enough to loan us the money to make the album we wanted to make and weâll be forever grateful. If youâre into fried chicken and seafood and youâre passing through Quitman, give it a try. You wonât regret it.

Secondly, we recorded at Earthsound Recordings here in Valdosta with our buddy Lee Dyess. Heâs an old friend of ours who runs a pro-style operation. He knows what heâs doing and weâre lucky to have him here. I think we knew what we wanted out of these songs and we were determined not to compromise for the sake of time. We didnât care if it took us years. We wanted to be able to listen to those songs without cringing in 10 years. We like bedroom style recordings too, but we wanted this album to be really textured because thatâs the type of production we thought these particular songs needed.

The lyrical content on Restless Rubes tends to focus on dealing with socio-political ideals of The South. Was there a conscious effort to stick to this theme?

I donât think there was a conscious effort, but now looking at the album as a whole I can see that theme in most of the songs. I guess that was just what was driving me to write at the time. The South is a mixture of the extremely beautiful and the staggeringly profane. I feel like we have a unique perspective because of where weâre from. Maybe we just wanted people from different walks of life to understand us a little more and not buy into southern clichÃ©s. Things arenât as cut and dry around here as people would have you believe. Thereâs so much more to write about than whiskey. Writing a song about a specific idea is like taking a highlighting pen and marking that something that exists in your environment because you feel itâs worthy of note. Hopefully the listener can make some sense of it and find some value in it.

You guys tour in a "First United Methodist Church" van. Can you explain the story behind acquiring said van?

Well, one of the perks of being from here is the multitude of church vans available for purchase. Church vans make really good tour vans for two reasons:
1) They generally arenât used that much and theyâre well taken care of. Theyâre kind of like fleet vehicles in that churches get rid of them periodically to buy newer ones and if you look you can probably get a good deal.
2) They are the best camouflage ever for a bunch of dirt bag rockers riding around pillaging town after town. Never been pulled over.

We came into possession of ours about two years ago. I went through the phone book and left messages on tons of church answering machines asking about vans. One called me back and we ended up getting a good deal. I might have told the guy I was a youth group leader, which isnât entirely untrue -- I am the oldest guy in the band. One time we played at a punk bar in Athens, GA called Repent and we got some funny looks when we rolled up in there like a bunch of Methodists.

Restless Rubes is your first album with Virgil and Suburban Home. How did that relationship come about and how has the response of the album been thus far?

We were about halfway through the recording process and I sent Virgil some roughs. He wrote me back and told me he liked the songs a lot and asked what we were looking for in a label. I told him that we just wanted someone reputable that genuinely liked our songs to put it out. Virgil and everyone involved with Suburban Home have been so good to us. When we were out in Denver a couple of months ago on tour we got to meet everyone at the label and we got to play with a lot of the bands on the label. Theyâre the nicest bunch of people youâll ever meet and we had a really fun time with them. Weâre about to fly out there for Suburban Homeâs 13th anniversary shows/parties. Weâre really looking forward to that.