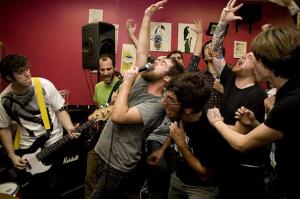 by Aubin Paul Streams 12 years ago

Today we're proud to bring you a full stream of Transfuse, the sole LP from RVA melodic hardcore act Resonance, who officially called it quits earlier this year. The band has garnered comparisons to everyone from Kid Dynamite and Shook Ones to the Get Up Kids and the Revolution Summer era.

Transfuse was released on Collapse Records a few months ago and compiles the band's first two demos, recorded in July 2004 and July 2005, respectively. The band's only other release was last year's split 7" with Permanent. If Tranfuse seems familiar, it's because it's the official vinyl pressing of 2004-2006, a CD-R the band released in extremely limited quantities, with a slightly altered track listing.

If the band's breakup has you bummed, don't worry too much -- we're told member(s) have started a new band with Permanent's drummer, described as "Fugazi meets Hot Snakes."

You can check out the stream on their Punknews.org profile."

Music: ...And You Will Know Us By The Trail Of Dead: "Bells of Creation"

Music: Neurosis ressurects Beyond The Pale at Roadburn 2009