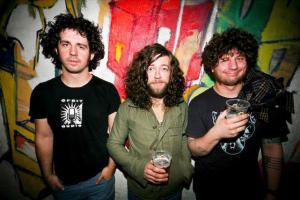 More streaming action for you today, this one is the new record from Seattle, WA's Akimbo. The record is titled Jersey Shores and is due out October 28, 2008. The acclaimed band fuses sounds like Led Zeppelin, Black Sabbath and The Who with Black Flag,The Jesus Lizard and The Melvins. The new record is the follow up to Navigating the Bronze which was released in 2007.

Check out "Jersey Shores" on their Punknews.org Profile.