by Aubin Paul Interviews 13 years ago

We're happy to bring you a unique interview today which features artists Ed Trask of Avail and Heather Gabel interviewing each other about their music, life and art. Trask, who along with drumming in the beloved Richmond-based band is a well-respected artist, who was named ""Top 40 under 40" in Richmond for his art.

Gabel is of course, the artist responsible for much of Alkaline Trio's striking merch and imagery and has also produced merch designs for My Chemical Romance, AFI and The Lawrence Arms. She continues to work as an artist. The two artists recently put together an art show in Chicago.

We've included some of both artists' work in the interview. You can find more of Ed's work on his site and more of Heather's on hers. 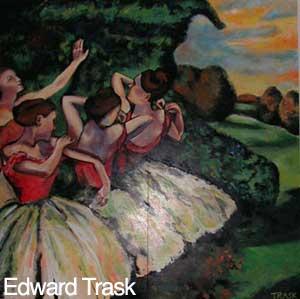 You painted an elementary school! Kids will remember it always as a part of growing up; that's got to feel pretty awesome- what would you consider your most exciting/rewarding artistic accomplishment ever?

I've worked painting murals with a lot of kids through V.C.U.programs, different elementary schools and residency programs, and every time I'm overwhelmed at how talented these kids can be and how visually untainted they are. These kids quite often will just attack a wall with paint and then after, take full ownership of what they have just painted.

I swear I learn something from every kids approach to making art. But the most rewarding thing is to realize that you have actually showed a kid that freedom can be obtained through creativity- whether it be painting, music, writing, e.t.c.

When you stand back from a finished mural you've worked on for weeks with 20 kids there is nothing cooler for you and the kids.

Which have you been doing longer, playing drums or painting?

As a kid, I always painted and was creative, but when I turned 11 and was given my first drum set it was on! My world revolved around playing drums every waking hour and learning every Judas Priest, Black Flag, Black Sabbath, Dead Kennedy's and Kiss song I could. Though I always copied skateboard logo's and record covers , the real practice of painting came to me my freshman year of high school.

My favorite piece of yours is a dark landscape (http://edwardtrask.com/art/paintings/gallery2/index.php) silhouetted tree braches frame a dusky river. it's so " balmy summer night" It harnesses something real and fleeting timelessly with such feeling- do you have a favorite piece of yours? Something you feel exceeded your own expectations?

Thanks.. Yea I did a painted a old three story doctors office / residence for a family in front royal Virginia one year. The building had been torn down many years ago and as I worked from old pictures I could feel the life that filled the building.. The painting was shown to the old doctor , whom was 99 years old trying to hold out to 100.This family had never seen their father cry but one look at the painting and the man was in tears and instructed the nurses to hang the painting next to his bed so he could see it till the end. 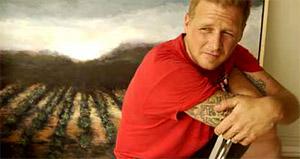 He explained that the painting captured what that building had meant to him.. A building and a practice, a dream, that he had built from scratch.. that now is a shitty gas station. I turned colored plastic and canvas into something a person wanted to take to the grave.. wow..

Your collected works look like a slideshow of Richmond. is that a conscious decision that you're making or is it just a case of art imitating life?

I think Richmond , as a conservative southern city which is just inundated with history, from the slave trade , civil war and industrial revolution, mirrors a lot of other cities in the country.

The old buildings , the westbound trains, the old jaded conservative Southerner, the beautiful river, the landscapes on the outskirts of town, they all represent a kind of lost past that I look to for inspiration.. I love this city..

Are your kids interested in art? do you guys paint together?

Eleanor , whom is 4, has had her first show of paintings at a cafe and it was awesome.. I put a bunch of colors with brushes in front of canvas's and she goes off. We showed 6 of her paintings and 3 of mine and the response was overwhelming.. I bought her a small little Gretch drumset but she hasn't responded to it like painting. O.K. maybe I bought the drums for myself. As for my 5 month old Loudon,well that little dude can drool and spit up some real masterpieces.. 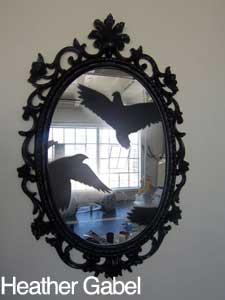 There seems to be a kind of dark under belly side to some of your work. At times I see a weird vaudevillian, Edward Gorey, Dame Darcy kind of macabre image, and other times an almost optimistic literal collage .It seems you always have some really cool hidden symbols and meanings. Do you think it's important to use metaphors, irony, and to have a lot of hidden symbolism attached to your work or can it sometimes be just about the image and nothing else, to let the viewer decide? In other words, when you're working do you have any real hidden agendas?

I completely do have a hidden agenda every time. The piece is always about something, masked and disguised as it may be, it is always about a specific thing. I don't expect people to get it, in fact, it'd be scary if they did because most of the subject matter is really personal. When I do photography it's always about something just looking cool, being interesting and pleasing to the eye. There's no message or meaning. I don't get anything other than visual satisfaction from taking pictures but painting is different for me in that respect. Personally, I can appreciate art for either reason, I don't think one is necessarily more important than the other in terms of me being able to appreciate something, however substance boosts visual appeal in any case. Even if you don't know what motivated someone to make something you can tell there's something, a drive, an idea, and that strengthens the graphic.

In your fine art you have a wonderful use of contour in your line work and you produce great compositions that are immediately pleasing. Is this a byproduct of your commercial band side?

Maybe. I've always responded to arresting, graphic images in other people's work so I think it makes sense that that's what I would try to do with my work as well, be it design for bands or a painting or a collage.

Skulls, Illuminati, the Masons, all have played a major hidden role in how our society breathes. Of all of the secret societies and such, which creeps you out the most?

I can't choose one since I don't know much about any of them but I kind of like it that way. Although I've always been initially turned off because most of them, as far as I know, don't allow women (or if they do, the women are totally a different group run by the men but still don't get in on all their secret activities) I like that there are these modern day organizations based loosely around secrets. It's like there could be real magic or something since they are so tight lipped about everything. Even if nothing really all that cool is going on I can appreciate the ritual and costumes at the very least.

Do you still love the life on the road and how long can you actually see yourself being on tour, if you still tour at all? 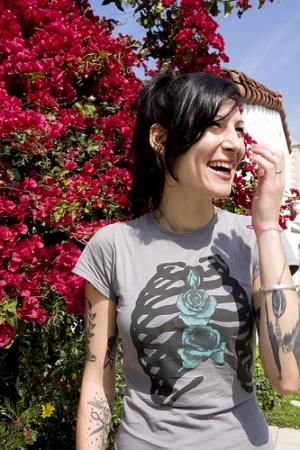 I will always love some aspects of it, the camaraderie, the traveling, the spirit of perpetual youth, but there are also things about it that get old fast. Like sleeping in a bunk instead of a bed, not having anywhere to be alone, not having any space to do yoga, not being able to shower if you want to, not being able to rest and get better if you're sick. I toured with Alkaline Trio for 10 years. We started in a van and eventually started touring in a bus. I took a job this past summer on the Warped Tour so I could hang out with my husband while working instead of touring with Alkaline Trio.

I thought I'd go back to touring with them but so far they have done 2 tours and I haven't joined them (although I'm still doing merch designs for them). Being in a relationship where both people are touring is next to impossible unless you're fine with hardly ever seeing the person you love…which I'm not. I'm not saying I won't ever do a tour again but it's definitely not a priority. I enjoy spending time with my husband (which is more often than not spent with him on tour) and having time to do art when I'm home.

I can see myself spending time with Tom on tour as long as he's doing it but I'm excited for the next chapter of my life and of our lives together. I mean, 10 years, selling shirts! I have more to offer than that.

Your husband uses his loud voice and musical talent to make a difference, or at least try to get people thinking about one . You, on the other hand, have used your artistic talent to do the same. Is there a bigger impact when art, music and protest come together and as an artist do you feel any kind of responsibility to make a political statement?

I think there is definitely a bigger impact when they come together. They are all the same idea, just different vehicles, so having more than one present amplifies the other and vice versa. Crass is the perfect example of that combination. Their album art always perfectly mirrored their music and their politics. While I don't feel an obligation in the traditional sense (I'm not thinking about my responsibility to the people that will see my work when I am making something) my beliefs and ideas, politically as well as personally, come across in my work.

There are overt feminist themes to my work but I don't expect people to see them all the time. Personally, I've found that if you are trying to make a specific statement with your work, be it a song or a painting, it can come across as really contrived while just doing what you're moved to do will always be superior because it's real and honest. Your politics will still be there because it's part of you, they'll just take on a different shape or sound.