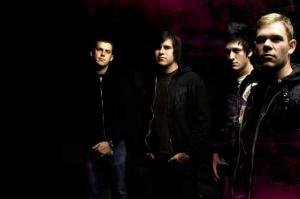 Orange County's Mikoto just released their new album, We Are The Architects, the followup to their 2005 self-titled album. The band's vocalist Ray Harkins spoke with our own Sarah El-Hamzawi about the recording of the album and what the band has been up to.

Looking over your MySpace page, you guys kept a studio diary the entire time you process was going?

It seems like people are really interested in how bands create and act in the studio and how that whole process goes. Bands can be either really secretive and not let anyone know what they are doing, or they do it the complete opposite and let fans be a fly on the wall and see everything. For me personally, I have nothing to hide, and we wanted to let people in and see just how hard the process can be. Hardcore has never been about building barriers, but rather breaking them down. We want to let people know that they can do the exact things we are. Being so open about our writing and recording is also a way to hopefully inspire some people.

You guys have funded the whole recording process yourselves, correct?

Yeah we did. We basically had an entire record written and although we have been talking to labels, we were in a weird position because a lot of us work in the music industry and it was as if people were afraid to approach us because they thought we could take care of ourselves or that we just knew too much. Finally, we just decided to take it in our own hands so we started asking people we knew, our parents, and we went in there ourselves and recorded a record. The record should have definitely cost us more than it did, but we were just relying on a lot of people we knew to pull us some favours in the studio.

Was there ever a time where you thought that funding it on your own would be unrealistic?

There were definitely times where it seemed hard. Up until three or four months ago we thought we would be putting out the album entirely on our own, but then we got a lot of interest from Torque Records. With the way that the music industry operates these days, it was just so much easier to get our music out to a wider audience with a label. Regardless, we were just creating this record for ourselves and then if we were going to release it ourselves we would want to keep it as cheap as possible and try and get help from as many people as possible.

Beau from Saosin produced your new album, and you guys seem to be quite happy with the outcome. Were you ever concerned that someone with a musical background so different than yours might have a different stylistic direction?

Me personally, I love working with him. I know there were times where our guitarist Matt had some difficulty doing vocals with him just because they had a difference of styles. There was a point where I was a bit concerned, but overall Beau does such an incredible job. Beau records in a very relaxed atmosphere and he is never trying to motivate you or push you to the point where it breaks you down. Beau definitely has a bright future in the musical production world, and I was real happy with him.

Now that the album is finished, can you pick out a certain song that has become most meaningful to you?

Yeah, there are a couple songs which stand out in particular to me. There is one called "The Hours We Keep," which we posted on our MySpace. Itâs one of those songs that mean a lot to me lyrically. It has to do with the struggles that a lot of people go through when they are trying to decide whether or not they want to pursue something they feel passionate about for their careers or something that is they feel is safe and "comfortable." Me being where Iâm at in my own personal life and working in the music industry, there is always a pressure that I should pursue "real life" activities and make a more substantial living. Itâs about the struggles that no teenager really thinks about until they are actually faced with real life. There is always a fork in the road, and I choose to stick with what I love. I donât regret this decision whatsoever.

Both of the songs you have released online seem to convey a sense of optimism during times of strife. Is this a recurrent idea throughout your album? What kind of experiences inspired your writing?

Yeah, it all relates to a very realistic take on growing up, and how people can all go through these different experiences and come out a better person. A recurring theme is that above all, hope should remain. We all need to go through bad things to make ourselves better people, even though it is really hard sometimes to see the forest through the trees. There are a lot of obstacles to overcome but if life was easy, we wouldnât learn anything. We tried to focus on those ideas lyrically so we could get a similar vibe throughout the album.

There are a lot of hardcore and punk bands that stick to a theme of being really angry and pessimistic about all the shit going on in our world. Why do you think it is important to show kids that there is hope, and that maybe they can do something about it?

Well, there are always two sides to that. People can look at a band like Killswitch Engage and ask what does this band have to be mad about? But if you peel a layer or two away, they could be dealing with a lot of stuff. So many bands choose to focus on the negative, and of course through negative experiences there can be art, but at the same time that shouldnât be the central focal point. When band after band keep producing record after record of that sort of downtrodden stuff it just gets old.

So what would you think of someone like Scott Vogel who has maintained being angry in his music for years and years?

Itâs really funny because I work with him on a daily basis through Century Media and the dude has this fire even though he has been doing this for fifteen years. The fact that he is still able to do this and find things to be angry about is just really impressive. It makes me want to pat him on the back, and he is just the sweetest dude ever. If you look at the past projects you have done, specifically with Taken, do you find that you have an added pressure to impressive people with Mikoto?

Itâs one of those things where I hope we have shed that monkey off our back. Since we broke up in 2004, there are so many kids now who donât even know who we were because their musical reference points donât go farther back then maybe a year or so ago. With that being said, we are not hiding the fact that we have members from Taken or Preacher Gone to Texas. There are people who have definitely followed us, but as far as pressure goes, we have always figured that people are going to say what they are going to say. We are not going to write a guitar part and then go back and change it to sound more like Taken. The funny part is that our guitarist, Martin, grew up listening to Taken and he is one of my closest friends because I met him when he was 14 and going to shows. He was directly influenced by Taken, and you can hear that in some of our earlier guitar work. We just try not to care much about what people day. Of course there will be people who say that Mikoto sucks and Taken needs to get back together, and at the end of the day we are just trying to create music we feel passionate about.

Yeah, itâs a completely different landscape. The music scene now is so widespread and fractured, that I guess you canât really call it a "scene" anymore. A lot of people just starting going to shows may not have a real context of where this type of music came from. Iâm not blaming them, but the only thing that I do encourage is that if you are going to start getting into this type of music, just do a bit of research. It really helps to know why certain bands existed and what it was a response to because no band just appears out of nowhere.

It seems like it is hard for bands to maintain staying power in the music industry today. Do you think that Mikoto could have a bright future as a long lasting band?

Honestly, we are in it for the long haul. The fact that we love to create music together is undeniable, and we are still going to do what we enjoy no matter what happens. I was just looking at Hawthorne Heights new record and it sold 60% less than their last records did. This is just a good pop culture example to show that even a band that was so popular can easily become the smallest blimp on the musical landscape. We just hope that we can impact people, it doesnât matter the quantity, just the quality.

Thanks so much for taking out the time Ray.

I appreciate you doing this!