Win tickets and CDs from The (International) Noise Conspiracy 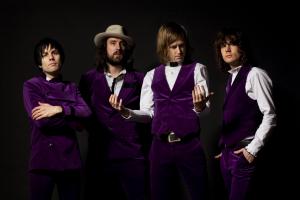 On November 25, 2008, The (International) Noise Conspiracy will be releasing their new album, Cross Of My Calling. But just prior to that, they will be headed to the United States for a six day tour. To celebrate the new album and the tour, we're giving away copies of the album, posters and tickets to the show of your choice.

The Prizes 5 winner will receive:

Sleepercar to open for Coldplay