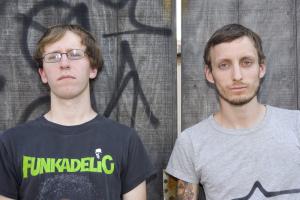 This week, Warship, delivered their debut album, Supply & Depend. Formed by two former members of From Autumn To Ashes, Warship takes FATA's aggressive inclinations and channels them through a heavy rock base, as influenced by hardcore as by bands like Husker Du and Soundgarden.

Punknews.org spoke with Francis Mark and Rob Lauritsen about the new record, From Autumn to Ashes and the future for the longtime musicians.

Let's start with the origins of the band. In many ways, it was a surprise to see the FATA breakup spawn a new band in the same overall genre so quickly. After the breakup of a nearly decade long band, what got you "back on the horse" so quickly?
Francis Mark: I guess I never really got off the horse. I just stopped and re-evaluated what I like in music, then gave the horse a different name. We were having Warship practices before the last FATA show happened. No break between the two. Why take a vacation from something you love to do? Perhaps if FATA had an ugly ending I would have wanted to get away from music for a while, but we were all still friendly and having fun playing together when we ended it.

FATA was part of the first wave of a style of music that has proven to be very popular and often copied. How do you feel about the legacy your band left?
Francis Mark: Some good things came from it and some bad things came from it, either way I think legacy is too strong of a word. When I hear the word Legacy I think of Jimi Hendrix or someone who is still relevant long after their expiration. I'll be interested to see what we make of all this in 30 years. FATA was a real gift to me. I got to see the world, that's crazy. Many things that I am proud of and a handful of things I'm slightly ashamed of in those last 8 years, but I wouldn't change any of it. No sir. It all lead me to where I am sitting now, and here is pretty good. You know I always thought we had too many member changes in FATA, but if if were not for those member changes I would have never met Josh and started Biology, would have never met Rob and started Warship and would have never really became a singer if Ben didn't quit on us. Good things come from adversity. With Warship we don't want any concessions, no favors given or grudges held for FATA's legacy, whatever that may be. If Warship has success it should be because we wrote a good album and are going to work our asses off touring to share the music with people.

The new band seems connected to FATA, but also moves into a lot of more mature and more complex directions. What was your goal with "Supply and Depend?"
Francis Mark: The goal was to make a record that we would like to sit down and listen to. Be the sound you want to hear, you know? One thing I noticed while playing festivals with FATA is that it seems like a lot of musicians don't like the bands they are in, even when they are very successful, there is something else they would rather be playing. So that was the goal with Supply and Depend, to not have the feeling of wishing it was something else.

Biology was a really promising project. Did you think of bringing it back in some form when FATA split? Why the decision to start another band instead?
Francis Mark: I do wish that we got to dedicate more time to Biology because that was a talented group of people and I think we created something really interesting with "Making Moves". I didn't think of bringing it back because Josh Newton, who was the guitar player in Biology now plays bass in Every Time I Die. Josh was a creative force and I couldn't do that band without him. The drummer, Cornbread Compton now plays with a great band called Cursive, and anyone who has ever seen him play drums knows that he can't be replaced either. Then for me it fell by the wayside while working on Holding a Wolf by the Ears and touring without rest. Thats my 2005 time capsule album. Where I was in music and life. Confused as hell.

One of the big influences I hear in "Supply and Depend" is 90s-era rock, particularly so-called "grunge" acts from that period. Were you conscious of that sound?
Francis Mark: I don't think Robbie was into any of that. In the mid nineties I liked Sound Garden and thought Matt Cameron was a sick drummer, Alice in Chains, Nirvana, even Smashing Pumpkins with another good drummer in Jimmy Chamberlin. I listened to Siamese Dream a thousand times, but no, we were not trying to make a grunge record.

Rob Lauritsen:Not so much musically conscious, but probably more on a production level. Alot of the records from that period had a real big, raw, and honest sound , not too compresssed. and that is kind of what we were going for. All the records from that period had a warm, live sound to them. Andrew Schnieder did a great job of capturing that. I probably like alot of the same bands those flannel wearing big muff pedal stomping Northwesterners do: Sabbath, Hawkwind, Motorhead, Husker Du, Saint Vitus, so I can certainly see where that connection is made.

Starting a new band can be a challenge, since you really need to build the name all over again, and it would have likely been easier to use the well-known FATA name but you went with the tougher route. Any thoughts on how that has played out?
Francis Mark: What fun is there in doing things the easy way? Plus, some of the people who helped me build that well-known name are no longer a part of my life.

Rob Lauritsen: When Fran and I started writing thinking we were going to do a FATA record, It didn't feel like one. To me, it seemed like we had a hundred line-up changes and I had only been with the band since '0 I had never written with the band, and people thought that the band would just run itself. We got together once as a whole band to write and it was awkward at best.. The day after FATA broke up Fran and I continued writing and everything clicked. I think it has played out great so far. On tour this past summer, Warship opened for Reggie and most people didn't know Fran was in FATA( if they blinked they would've missed that I was) and it was great to see people take it for what it was, a new band.
Is Warship going to be an ongoing project or a one-off?
Francis Mark: It's going to be an ongoing project. We are commited to this.

Even though the album is just behind us, have you started writing again?
Francis Mark: We got together one recent morning and wrote something cool but then went and rode rollercoasters until I puked on the Bull and we have not played since except to practice the album songs for a show. I really like being in the studio and making albums. I don't want to let two years go by before we do it again.

Rob Lauritsen: Fran and I have a few ideas of songs we've been floating around. They sound promising, and we figuered we give ourselves a little more time to write for the next one.

What's in the works now and planned for the rest of the year/next year?
Francis Mark: We'll be playing some local shows in NYC and Long Island. We are talking to some booking agents now and hoping to get busy traveling with one tour confirmed for the west coast starting Nov. 28th. That tour is with Fall of Troy and The Number Twelve Looks Like You.

Thanks for helping us out with this interview.