Fat has issued a double-vinyl LP of the Good Riddance posthumous live album, Remain in Memory: The Final Show. According to the label, only 1100 copies were pressed and each record is colored vinyl with hand-numbered gatefold jackets, including an full color, 56 page Good Riddance photo history book.

The album is a live recording of Good Riddance's final show in their hometown of Santa Cruz, California on May 27th, 2007. 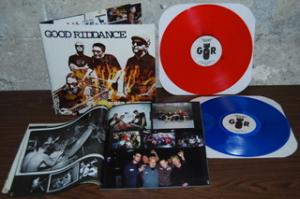