Mitch Clem of Nothing Nice to Say 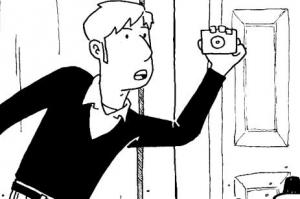 by Aubin Paul Interviews 13 years ago

We were thrilled when we heard our friend Mitch Clem would be publishing his first comic book, compiling much of his beloved Nothing Nice to Say material in a Dark Horse-issued trade paperback. So after reading through the book, we decided to get Mitch to tell us a little about his art, his process, Dillinger Four and a few other things.

Tell us a little about how the book came together. I imagine getting published by Dark Horse was quite a thrill.

Yeah, it's incredible. If you had told me a year ago that Dark Horse would ever be interested in my comics, I wouldn't have believed you. In fact, when I was first contacted by them, I thought someone was playing a prank on me, for real, and I was very skeptical. So yeah, that's cool. It came together pretty simply, I guess, they just wrote to me and asked if I wanted to do a collection, and yes, I did, and so my friend Zach and I assembled the comics from 2005-2006 into pdfs and sent them to Dark Horse and they printed a shitload of them out and put them into stores. They almost surprisingly never once asked me to change anything except some spelling mistakes. So it was a very simple process, they were really cool.

Nothing Nice to Say has been on a bit of a hiatus for the past little while, but you're still busy with My Stupid Life. Why the move? 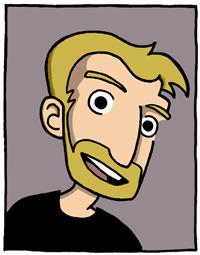 Basically, everyone gets sick of what they're doing at whatever point. As an artist, I feel that forcing onesself to work on a project when they don't want to is a double-edged sword. For a while, you're perservering through adversity and learning how to push yourself to create no matter what, which is benificial, and often yeilds good results. But as the time stacks up, that determination training turns into stagnating. In short: If I get too bored with what I'm doing to the point where I'm apathetic towards the project, I make shitty comics. I've found a solution that works for me is to, when I find myself stagnating and making bad comics because I'm tired of a project, that project goes on hold and I work on something else. That way I'm always still creating, I'm always making comics and progressing in that sense, but I don't need to worry about wasting my time with bad comics I don't want to make.

And so every once in a while that's NN2S. Every now and then I have to stop making them for a little bit and focus my efforts elsewhere, and, in the grand scheme of things, that leads to better comics across the board, even if they aren't all necessarily about punk rock, or if their focus is in experimenting with different kinds of humor, etc. My stupid Life is very quiet and subtle, sort of a dry humor, best read in big chunks, whereas NN2S is just insanity, very loud and silly. I love both comics, and I'm very proud of both of them. But I can appreciate that not everyone likes both. So I apologize to everyone for taking breaks from whichever comics of mine they like the best (or dislike the least, as the case may be) every now and then. But, overall, it's in your favor for me to do so.

My Stupid Life seems very autobiographical. Was NN2S as inspired by your real life?

I mean, yes in that they were inspired by real thoughts or observations I had. The difference is NN2S is those observations filtered through characters that might not approach things the same way as me, and whose opinions I might (and often do) disagree with. Distorition and exaggeration for the sake of humor. Though, to be fair, MSL is often made up too. Again, those situations are inspired by real events and then reworked until they're funny (or at least until I think they're funny).

You recently stoked some controversy with your arc about the D4 leak? What about the leak inspired you to start doing NN2S again and what do you think of the rather stern reaction you got in your forum?

It should be pointed out, first off, that there was really only one person who took me to task for those comics. No one else seemed to interperet that, in telling a joke about a real-life situaton (in this case the D4 leak - which, for the record, I wasn't responsible for) I was somehow advocating people to not pay for the album or whatever it is that dude thought I did.

But yeah. I thought that reaction was silly, obviously. David Cross tells jokes about rape, no one thinks he's creating a new generation of rapists. They're jokes, it's silly. It's about context and taste and restraint when necessary, otherwise you're Carlos Mencia and you're just actually a bigot. But that's not what I do, I'm not rallying troops, I'm just making jokes. But this guy didn't think that was an excuse. I don't know, he's nuts, whatever. I don't think anyone's concerned about it anymore. The only really bad thing that came out of the whole fiasco was I found out the guy who had sent those emails was the bass player for the Selby Tigers, and I really liked the Selby Tigers. I thought he was cool. That was kind of a buzzkill.

Over the years, you've been doing more and more artwork and show flyers. It seems like a natural fit, but how did it all come together?

At some pointed I just wanted to do it. There were local shows I thought were cool and I wanted to support that, so I'd make flyers for the ones I was stoked for, people usually will let you make a flyer for a show they booked if you just ask. Eventually the demand got to the point where I had to charge, which, who cares, but, at this point, the demand is such that, if I did them and still charged what I'd be worth given the demand, I'd have to charge enough that it's not worth it for smaller shows. So I kind of don't do them that often anymore. I'm back to making free ones for local shows in San Antonio just as a support-your-scene kind of thing, trying to pull my weight locally to make cool shit happen. Doing art for bands I don't know the focus has shifted more to album art now, which is more fun for me and is more worth it to the bands.

This is a horrible question for a band interview, but I think it's worth asking since we're talking comics; what strips and other media influenced you in NN2S?

The big ones two are Bill Watterson and Aaron Cometbus.

Calvin and Hobbes was my bible when I was a kid, that was my world. It was just magical and amazing, everything about it, how it was funny, I genuinely cared about all the characters. There were other cartoons that influenced me in my childhood and made me draw comics back then, like Far Side, Garfield, Looney Toons, but I think Calvin and Hobbes was the big one, and the one whose influence can be felt in my work to this day, especially in NN2S.

Cometbus, on the other hand, I discovered that when I was a teenager, and feel in love instantly. Cometbus was the reason I started a zine in high school, he's the reason I ever attempted self-publishing. And, from there, my experience with my zine was what let me move comfortably into self-publishing via the internet, which eventually led to a print book. Full-circle. 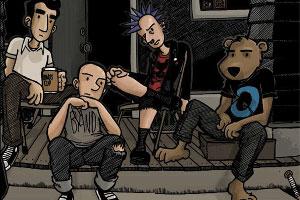 But yeah, I owe Bill Watterson and Aaron Cometbus a lot of thanks, they literally changed my life.

Any chance we'll see another one of your "Best of" lists for 2008 in strip form?

Probably not, but maybe? I can't afford to buy every album that comes out, and I can't always have my finger that much on the pulse of new bands and new releases to hear everything that comes out or know to listen to everything that comes out to really consider myself much of an authority on the issue. I can tell you right now that the new D4 album is the best record of the year, that I can't top listening to "Bird Roughs" by Underground Railroad to Candyland (even though that came out a year or two ago), and that Shang-A-Lang is the new best band in America now that the Chinese Telephones and the Ergs broke up.

When will we see the next NN2S book?

Jesus. Soon, hopefully. I'm sure Dark Horse would do another one if this first one actually sells, but I don't really know if it is or not. The people who are getting it seems to love it, I've been hearing a lot of really good feedback. But for a company like that, it ultimately comes down to economic viability, right? They won't want to do more if they're not gonna sell. But, you know, they get first dibs, and if they don't want to do another one, someone will. I haven't really asked yet. I've just been focusing on the comics at hand and the occasional album covers.

What's next for you?

I'm going to pick something new to listen to and then I'm gonna make some pizza.