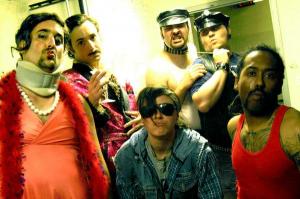 Via an Anonymous Source, Posted by Adam White 14 years ago

Black Fag, the "absolutely fabulous" tribute to Black Flag, has announced a tour of California in December. The "I Caught Henry Kissing Santa Claus" tour will see the parody act play a number of weekend shows in the state, including a gig at 924 Gilman.

Black Fag features the alter ego of Jeff Penalty, the punk filmmaker known for documentaries on the Bouncing Souls, Youth Brigade and most recently NOFX's "Backstage Passport." Penalty also controversially served as one of the recent vocalists of the Dead Kennedys.

Bad Religion sells one shoe for Keep a Breast foundation