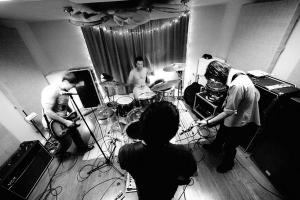 Far, one of Jonah Matranga's many musical projects recently got back together to tour the UK. While we missed them on this side of the pond, our very own Sarah El-Hamzawi took some time to talk to Jonah and band-mate Shaun Lopez about the band and their recent shows.

A lot of bands continue to cite you guys among their influences. Turning it around, what were some bands that influenced your music?

Shaun Lopez: I think back then we all had our personal favorites. Some of the music I liked, the others didn't. I think collectively we all liked Zeppelin, Beatles, Helmet, Sunny Day Real Estate, Fugazi.

Jonah Matranga: Dude, you didn't like the Beatles back then, I remember fighting with you about it. Took you some time to come around to good honest songwriting (laughs). You turned me on to Bad Brains and 7 Seconds, I turned you on to Petty and the Beatles. Johnny was Pavement guy, Chris seemed to dig it all. We all united on Zep and Fugazi, that's definitely true. It was a good car crash.

What made you guys feel like it was the right time to reunite? Was it a group decision or one person suggesting or convincing the others?

Shaun: I think we have all been talking about it off and on for the past five years, but it never really felt right and natural until now. Chris and I have been talking about it for the past couple of years, then Jonah called me one day early this year and mentioned it… It kind of started to get serious after that. We all agreed to only do it if we were all on board 100%, and here we are…

Jonah: Yea, there had been little mentions of it for me with Shaun or Johnny, didn't know that Chris and Shaun were chatting too. Figured someone's gotta show the younguns how it's done before we're too old too (laughs). Nah, just felt right, really.

What was the major issue behind Farâs break-up? And what is the hardest part of making band dynamics work?

Shaun: The major issue was classic band differences. I know at the time Jonah wanted to make a solo record and didn't want us to wait around for him while he did that. The hardest part of band dynamics is communication and never thinking the worst of the other. That's my feeling anyway. Ever since I have adopted that philosophy, it seems like Far has been working together pretty well…

There has been a real evolution in sound from Listening Game to Water & Solutions from a heavier, more hardcore style to later incorporating melodic breaks. If you were to make more music together, which kind of musical direction would you want to take? 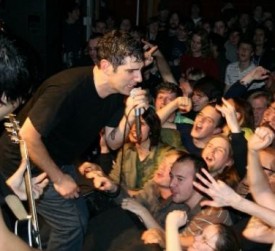 Shaun: That is hard to say. I think all of our records have all been pretty different from one to the next and that's something I'm pretty proud of. Not like we worried much about it before, but without the pressures from The Man ,we would probably make a record that was very different from W&S. Plus with me having my own studio now, it could be pretty nuts. That is actually kind of exciting to think about, but who knows, we might end up just killing each other (laughs)…

Jonah: Mostly, I think W&S was as pure a Far record as we were going to make. If we ever had the time to hang out with each other and write, record, all that stuff, I'd be as curious as you to hear what direction we'd take. I actually like external influences on bands, like producers and even label folks. Even if I end up thinking they're full of shit, having the ideas from outside the band can get me out of some jams in my head. Sardy, who produced Water & Solutions, did amazing things for our music. The label folks were tough sometimes, for sure, but the whole thing was pretty tangled at that point.

Judging from my experience, Far was a really polarizing band in the sense that people either really loved you guys, or could not get into your sound. Do you think this response is a good thing or a bad thing?

Shaun: That is always the band that I have wanted to be, so I guess that's a good thing.

Jonah: Most of my favorite artists, whether famous like Prince, Bowie, Neil, Sinead, Zeppelin or whatever, they're all artists that some people completely love and some people completely hate. I tend to think of that as a good sign. In our case, I think we were sincerely looking for something new, for ourselves, and that's all that matters to me. I'd love it if everyone loved our music, but if we got people to love it by trying to be something cool or in fashion, that ruins the whole thing for me.

Your recent cover of Ginuwineâs infamous "Pony" is awesome. What made you think of doing that, and any chance for any other covers in the future?

Shaun: It's a song Jonah and I have always loved and when we thought of the fake name "hot little pony", we thought it might be fun to record a version of Pony. We hung out in my studio for a day and made it happen. It came out well, and we had a lot of fun doing it. For me, covers have always been fun. I'd definitely like to do more.

For your reunion shows you are doing a UK tour. Why did you decide to go there as opposed to doing more dates in North America? 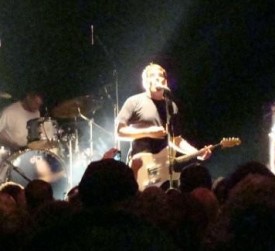 Shaun: The UK rules. The crowds were always good to us over there and we can't wait to get back, say hello and rock out again. The USA is so large and hard to cover in a short period of time. The UK seemed like a good way to start things off and kind of see where it goes from there.

Jonah: Again, just not over thinking it. Seemed a good place to go, had a friend there ready to help set it up, just did it. Simple.

What bands have you guys currently been listening to?

Shaun: Hmmm… I always draw a blank on this question, but let me scan iTunes real quick and see what I've been listening to…

Anything Justice puts out, remixes, etc…
John Legend - Evolver
Cancer Bats - Hail Destroyer
Sebastien Grainger - And The Mountains
Oasis - Dig Out Your Soul
Audio - To The Edge Of Reason

Southern Ontario act, Attack in Black will be joining you guys on some UK dates, have you ever listened to them? If so, what are your thoughts?

Shaun: I checked them out on Myspace when there was talk of them supporting. I liked what I heard, but haven't had a chance to listen to the record yet, but I hope to before the tour.

Jonah: Stuff sounds good to me. The guy who's doing the shows over there recommended them. Also, a cool band called Science Vs. Romance will be playing. Good stuff. What does the future have in store for Far? After the reunion tour, whatâs next?

Shaun: Not sure just yet. I suppose if everything keeps feeling fun, more stuff will come from that… Jonah: Yea, pretty much keeping it as far away from feeling like a Reunion Tour as possible. Just rocking. Or not.

Last question: Do you think music will be a part of your lives forever? Can you see yourself doing anything else completely unrelated?

Shaun: No, I can't see myself ever doing anything un-music related. I'm a lifer and it's probably not very healthy, but I love music. Jonah: In some ways, I can see myself being lots of other things, the guitar and all seem just like any number of other tools one could use to make stuff. Still, I may just be that much of a music geek that I keep going. We'll see, I guess. Thanks so much for your time, and good luck with the tour! Shaun: Thank you so much for the interview. It was fun :) Jonah: Good times, great oldies. Thank you, for reals.

Charities: Ann Beretta, Pedals On Our Pirateships, Horsebites benefit for Punks For Presents