NOFX has announced plans to release their Fuse.TV television series, Backstage Passport on DVD. The show aired on the network last Spring and followed the band on a world tour. With the release of the DVD, the program will finally be available to many of the countries that NOFX visited on the tour.

Fat Wreck Chords has announced that the DVD edition will feature all eight televised episodes as well as two hours of bonus footage which was cut from the final show. The DVD drops March 17, 2009. 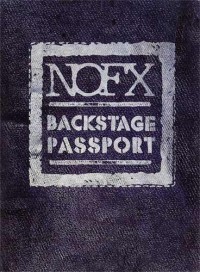