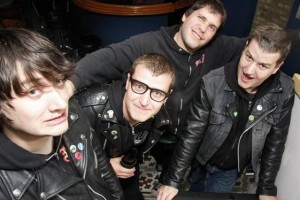 There are people in the world who believe the more technically proficient and lyrically profound a band is, the better they are. Then there are those of us who realized long ago that raw power and heartfelt energy (two elements that make up the very soul of punk rock) could more than make up for any amount of guitar lessons or thesaurus thumping. Teenage Bottlerocket is a relative new addition to the latter and we figured it was high time to give the Laramie, Wyoming four-piece a closer inspection.

How did Teenage Bottlerocket come about?

Ray: It all came about by us being in different bands; Kody was in the Lillingtons and Brandon and I were in another band (Homeless Wonders). We had played with the Lillingtons in the past. The first tour we did with Kody was a temporary thing and by the end of the tour we all decided as a group to keep this going. It wasn't anything that was intentional, we just played rock 'n roll music and I guess it was destiny man, I don't know. How did you end up with your best friends? I'm not sure how it happened.

Kody: We've always been really good friends and it was cool that they asked me to play. It just kind of worked because I had some songs written and I didn't have anything to use them with. They asked me to go on tour with them so I did. 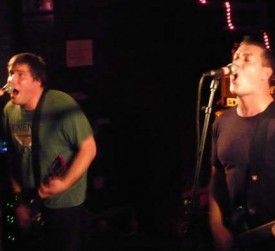 So where did the name come from anyway? Last time I checked we're all well on our way to mid-life crises?

Ray: Our first guitar player (who's actually from Rockford, IL) his dad had a car in high school that he nicknamed the "Teenage Bottlerocket" and that's where we got the name.

How did you get into punk, especially in a place like Laramie?

Ray: The local scene in Laramie is pretty cool. We've had a lot of really good bands there. Even before I got into punk rock Fugazi played there, Seaweed played there, Firehose played there. Now that we're more established as a scene in Laramie (if you can call it that) Against Me! has played there, Lawrence Arms have come through, Groovie Ghoulies… so it's not like it's a completely dead town. It's a college town.

As far as me getting into punk rock music; when I was little and skateboarding, my older brother had the Black Flag bars on his griptape and I was like "What's that?" He had My War and Suicidal Tendencies that I listened to, but it didn't really have the impression on me that Green Day made. From there I got into the Lookout! catalog with Screeching Weasel and Operation Ivy. Everything else just kind of fell into our laps. That's how the road was paved for us.

Kody: I don't know. Basically, a lot of us were kind of like nerds and outcasts at school. People would have records and they would get passed around. Somebody would have a recording of someone like the Dayglo Abortions and we'd make cassette copies that would get passed around. Some of the first stuff I heard was (obviously) the Misfits, the Cramps, Dayglo and shit like that. Then I got a recording of this radio show that had Social Distortion, Screeching Weasel, Fugazi and stuff like that. I really liked it and it went from there.

You recently put out your 3rd album Warning Device and that made me interested to hear your thoughts on legal/illegal downloading?

Kody: We were talking about that in the van, actually. How kids now-a-days can just go anywhere with music they downloaded. It wasn't as easy as is today (like now you can just get online and check shit out). Back in the day -and especially in Wyoming- you had to search for that shit. When you found it, you thought you were hot shit.

But, it seems like shit's going digital now. We still always press vinyl, and it sells really well. Vinyl probably sells better than CDs for us. But, I'm kind of torn on it, I like iTunes for myself. But, at the same time I like the nostalgia of having an album as a hard copy. I'm mixed; I don't really have a preference. As far as illegal downloading, it's going to happen. 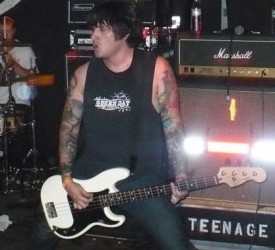 Ray: Illegal downloading is going to happen no matter what you do, so you just have to keep playing tunes and releasing them. We haven't really seen an impact on our royalty checks because in the past (before downloading was happening), we never got royalty checks. Our band had got to the point where we would get a check like every 6 months or whatever and that happened after illegal downloading came to be. So, I can't really compare it to the way it was. There's no way of avoiding it so we're going to keep rocking.

I gotta be honest. I downloaded Dean's Dream (one of my favorite Dead Milkmen songs), but it's a vinyl only release. What was I supposed to do?

Kody: No, I don't blame you one bit, I'd do the same thing. But, we're actually going to release that later. I think it's going to be a digital only release or we might do some vinyl (we still haven't decided yet). You know, if you can't find something or if a band has something out that you can't find and you download it illegally then that's their fault. They should put it out there. If their going to record shit and they want it released then they should've put it out.

I'm so glad you said that. Now I don't have to atone for that particular sin next time I'm in mortal danger. Your songs often have a noticeable simplicity musically and lyrically, which made me wonder if it was a commentary on the dumbed-down state of the music industry or proof positive that music doesn't have to be a math equation to be great?

Kody: I think it's more of the latter.

Ray: I guess simple is the best way to go. It's what we like and we're not skilled enough guitar players to execute the crazy riffs like Iron Maiden or something. We keep it simple because we're restricted to our talent. At the same time, it was very intentional for us to play simple songs. We wanted to break it down to its roots when we started the band; with a lot of emphasis on the Ramones (of course) and also with other things in mind like Buddy Holly and Richie Valens and that kind of stuff. We wanted our sound to be a part of something that meant more to us than trying to play guitar leads for the hell of it. We have the simple leads that we do but we're not the best guitar players. We never really compromised our sound to try to achieve anything either. We just wanted to play the music that we loved.

Most bands have gone the political route over the years (either basing a song or album or their entire career around it), but you guys have turned away from that line of thought, any specific reasoning about that decision or was it just a natural course?

Ray: I think it's not something we're intentionally avoiding. If Kody wrote a song that was political we would play it. If I did the same thing, we would play it. We just haven't yet. It's not something we're avoiding. Sometimes you pick up a pen, paper and your guitar and what comes out, comes out. Sometimes you're not really aiming for anything. I haven't really sat down with the intention of writing a political song, but it's not anything we're avoiding. In the future, it's something I would like to do. 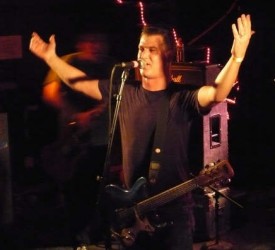 Do you foresee the day when the band will become a financially viable career path?

Kody: Things are getting better for us all the time, every tour we go out on we draw more people and everything like that.

Ray: We're doing our best but I don't think so. We'll see what happens. Right now we're doing alright with our traveling and everything like that. I'd like to see a day where I didn't have to work a full-time job but we always have, so we're used to it. It's just the way that we roll, man.

While we're on the topic of your full-time job; Ray, I read somewhere you have quite an interesting one.

With the band becoming more and more successful (at least I imagine so) why stay in Wyoming? Why not make the move to LA or NY, or hell, even Chicago?

Kody: Our families and stuff are in Wyoming and that's just where we live. We're lucky enough to have jobs that are able to give us time off to do it. Which I think would be almost harder in a city. We're pretty comfortable where we're at. We get the job done so there's never really any talk of moving it around.

Ray: At this point I think definitely our careers. I work in Laramie, my wife and I own a house there, she goes to college there. I'd love to move but at this point I can't because my job needs me where I'm at.

Alright Ray, let's knock out those twin questions that are always on the tip of everyone's tongues: do you communicate telepathically?

Ray: Only because I'm giving it to him. No, I'm kidding.

Do the two of you ever swap stage duties? You put on the glasses and pick up the drum sticks; he picks up guitar and vocal duties?

Ray: I'm terrible at the drums and he's terrible at playing guitar. So, if we did I think everybody would know right off the bat -even if we looked exactly like each other-. It would be funny though. I think it would be hilarious.

I'm surprised you haven't already. Fuck it, play 'til they boo, then explain you were just out back of the club toking a mean spliff and the two of you forgot who you were. I'd believe it, hell after seeing the video of David Hasselhoff shit-faced eating a cheeseburger off a bathroom floor while his daughter scolded him, I'd believe damn near anything. Come to think of it, what kind of embarrassing video/s are you afraid might get leaked?

Ray: I don't know, it would be awesome if there was something out there, I could see it happening. I'm not afraid of anything going out there. I think we're sitting pretty good in that department. I did see David Hasselhoff at the airport in Vegas though. I got my picture taken with him. Me, Virgil and all the rest of the guys in Suburban Home, we got off the plane for punk rock bowling and David Hasselhoff was right there. We hung out with the 'Hoff. He's awesome!

Kody: Nothing for me. I'm just a pretty cool guy. I don't do anything embarrassing, ever. I never let my guard down. I'm all business [laughing]

Alright, how's about a horror story from the road to round things out?

Ray: Nothing too wild, we hit a deer. It blew up, we definitely killed it. We were going 75 mph and it ran out in front of the van. It's antlers flew a hundred yards I'll bet. We pulled over; made sure our shit was ok. I guess youâre supposed to call the highway patrol, but we didn't. We just took off minus a right front headlight.

Kody: That one was a pretty good. There was shit splattered all down the van.

Something Awful on Danger Radio, 3Oh!3, Forever The Sickest Kids, Cute Is What We Aim For