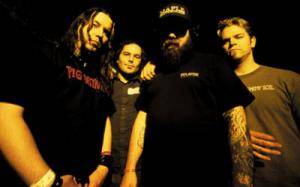 by Jesse Raub Relapse 13 years ago

Boston, MA's Agoraphobic Nosebleed have announced a new album titled Agorapocalypse, set for an April 14th release through Relapse Records. This will be the band's first album with their new vocalist, Kat. The thirteen songs were recorded by the band's own Scott Hull (Pig Destroyer) at his Visceral Sound studios.

The band also has a slew of splits to be released in 2009 with details and sound clips available on the band's MySpace page.