Contributed by ben_conoley, Posted by Ben Conoley Paper and Plastick Dispatches 12 years ago

Gatorface and Virgins are back for their second installment in a series of Dispatches. Alex Gatorface and Sam from Virgins will be checking in for the rest of the week to recount a recent series of shows with Gatorface in support of their recent Sick and Stupid 10" while Virgins released Miscarriage in 2008.

"I canât believe Tony thought two pizzas would be enough for all of us!" - Richard Alexander Minino 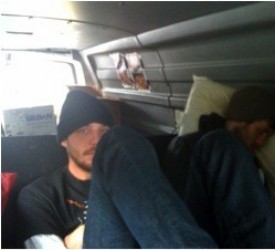 We woke up to pancakes and coffee courtesy of Tobyâs wife Rachel and a fucked up looking cat. It looked like someone punched it in the face, but I think it was just a Persian. We hit the road and made our way to Richmond, which is one of our favorite cities in the country (Mostly due to all of our good friends there than the location itself). We showed up at Tony Forestaâs (Municipal Waste and our new band No Friends) house and he had a couple pizzas waiting for us. We decided that there had to be more pizza so we got two more and a shitload of PBR. Iâm pretty sure Richmond only sells this brand. Maybe the whole city is sponsored. Then punk rock happened for a couple of hours. Virgins played, Gatorface played, and then No Friends played our first Richmond show. The few of us that had to pull double duty were worn out, but it didnât let that keep us from raging. It was easily the best show of tour thus far, and there were a ton of friendly faces in attendance. We drank til the bar closed, then went back to Tonyâs house with a bunch of friends (which weâre supposed to have none of) and kept hanging. People slowly trickled off to go to sleep, but Richard and Sam and Eric and Garth from Strike Anywhere kept drinking and talking about how good turkey sandwiches were for a couple of more hours. They then decided sandwich eating was imminent. Eric lied when he said the 7-11 was only two blocks away. A couple of blocks make a pretty big difference in 30 degree weather at 5:00 am. They gorged themselves with snacks and fell asleep sans blankets by Tonyâs heater. 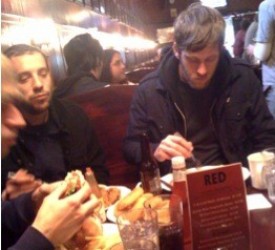 Woke up at Tonyâs. Eric puked a couple of times. Everyone mumbled and grumbled around for a little while and then we met our friends Justin, Josh and Nathan at a place to get some food. After eating Alex, Sam and Richard went with Tony to do a photoshoot for No Friends (which made us all kind of uncomfortable because it feels incredibly corny) and the rest of the dudes went record shopping. We hit the road (late) and started the 5 hour trek to Wilmington, North Carolina. We showed up at the Soapbox Laundrolounge and realized it was a pretty badass place. It smelled like cigarettes and laundry detergent. The other band on the bill was Battle! From Gainesville and it was cool to run into another Florida band while we were gone. After Phil from Virgins heckled the bass player (with nothing but comedy and good intentions in his heart), we thought they might try to fight us, but they were super sweet dudes. We played then drank until the bar closed. After a stop at Waffle House we made it to Chason the promoterâs apartment complex and stumbled around in the cold trying to find his place. Just then, we got heckled by some shitty jock dickhead and Alex yelled out the above quote. Very stupid, but very funny.